US and European stocks looking tired after recent rally 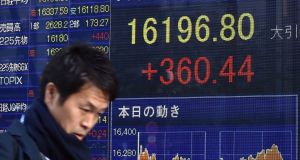 A pedestrian walks past a share prices board in the Tokyo stock exchange. investors are less worried about China’s financial system and economy after lending figures improved, the renminbi rallied and the central bank delivered a calming message to markets following the country’s lunar new year break.

US and European stock markets are looking tired after their recent strong performances but Asian bourses delivered another sturdy performance as the rally in oil prices underpins risk appetite.

The pan-European Stoxx 600 index is up 0.4 per cent in afternoon trading , after surging 8.3 per cent in just the previous four sessions, but is well off an earlier high. The FTSE 100 in London is down 0.7 per cent while the German Xetra Dax index is up 1.4 per cent.

The FTSE Asia Pacific index rose 2.2 per cent after Japan’s Nikkei 225 took its advance for the week also to 8.3 per cent with a 2.3 per cent jump.

Supporting the bullish global tone of late has been the latest rebound on Wall Street. The S&P 500 is down 1 point to 1,925 in the current session, although the equity barometer rose strongly on each of the previous three days.

The S&P is up 6.6 per cent since its two-year intraday low on February 11, with analysts citing a range of factors for the bounceback.

Arguably the most significant is the rise in oil prices, which has bolstered shares in commodity companies and is seen as reducing the need for energy-producing nations to sell assets in their sovereign wealth funds to raise cash.

Brent has gained nearly 18 per cent from last week’s low following news of a proposed freeze on production by the world’s biggest producers, a deal designed to tackle the global oil glut that has been suppressing prices.

A rally in banking shares is another boon. The badly battered sector has attracted “bargain” hunters as fear over the financial condition of Deutsche Bank wane and after JPMorgan chief executive Jamie Dimon showed his faith last week by purchasing $26m of company stock.

Further support comes from hopes that the US Federal Reserve is cognisant of recent market turmoil and evidence of meek global economic growth and is thus more likely to slow the pace at which it raises borrowing costs. Minutes from the Fed released on Wednesday appeared to buttress this thesis.

“The overall tone of this report was dovish, relative to the proceedings following the December meeting, and it clearly suggests that the Fed has moved to the sideline as they assess the fallout from recent global development on the domestic economy and inflation,” said Millan Mulraine macroeconomic strategist at TD Securities.

“As such, we continue to expect the next move to come at the June FOMC meeting - at the earliest - with one additional hike during the second half of the year, possibly as late as December.”

The dollar index is up 0.2 per cent on the day at 96.98 and benchmark 10-year Treasury yields, which at the height of last week’s stock market sell-off hit a low of 1.53 per cent as “havens” were sought, are currently 1.80 per cent, down 1 basis point on the day.

A reaffirmation from European Central Bank president Mario Draghi that he will take additional stimulus measures to lift the bloc’s economy is considered an additional support for risk appetite. The euro is down 0.4 per cent to $1.1078 and 10-year Bund yields are easing 5bp to 0.23 per cent after ECB minutes released on Thursday matched with this dovish narrative.

The Shanghai Composite dipped 0.2 per cent on Thursday and Hong Kong’s Hang Seng added 2.3 per cent as investors absorbed the latest news on Chinese inflation trends.

Consumer prices rose 1.8 per cent year-on-year in January, quickening from December’s 1.6 per cent rise to set their fastest pace since August. There were encouraging signs for wholesale prices, which have been falling since March 2012, with the pace of decline slowing to 5.3 per cent year-on-year from a 5.9 per cent fall in December.

However, the pick-up in consumer prices was due partly to the lunar new year holiday falling earlier this year and was driven by rising food prices.

Economists at ANZ expect Chinese inflation to start retreating in March as these seasonal factors dissipate, and reckon the pass-through from weaker commodity prices will continue to weigh on producer prices through the year.

“In addition to the risk of deflation, China also continued to face capital outflows in January, as foreign reserves declined further. Therefore, we believe that further monetary policy easing is still needed,” they said.

The Japanese yen is 0.3 per cent stronger to Y113.76 per dollar despite some disappointing trade data from the world’s third-biggest economy. Exports sank 12.9 per cent year-on-year in January - the fastest pace since October 2009 - after an 8 per cent fall in December.

Imports shrank 18 per cent from a year earlier, matching December’s fall and the weakest performance since October 2009.

Economists at Credit Suisse noted that “a stronger yen is liable to subtract from real growth by triggering deceleration in exports and depressing corporate profits and investment. The net impact on real GDP should be near-neutral in the longer run, given that lower prices are likely to shore up private consumption”.

The Australian dollar, down 0.4 per cent at US$0.7151, is among the Asia region’s worst performer following a jobs report showing the unemployment rate rose more than expected to 6 per cent in January and the economy shed 7,900 jobs.

However, the Aussie stock market rose 2.2 per cent, its biggest one-day gain since December 16 as the global rebound in resources shares boosted the bourse.

Sterling is rallying 0.4 per cent to $1.4343 on hopes UK prime minister David Cameron can secure an EU deal that will help see off “Brexit”.