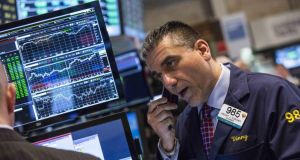 US stocks changed little today, as equities recouped much of their earlier declines amid signs of progress in diplomatic attempts to ease tensions surrounding Ukraine. Photograph: Andrew Burton/Getty Images

Big exporters were hardest hit, with shares in German engineering giant Siemens closing down 2.2 per cent, and the world’s fifth-largest agrochemicals and seeds maker BASF falling 1.9 per cent.

China’s first domestic bond default sparked worries about loan deals using copper as collateral, leading to a sharp-sell off in metals prices. Copper, a good indicator of global economic performance because of its broad usage across industries, slumped to its lowest level since July 2010 before rebounding slightly.

Shares in food group Glanbia closed up 2 per cent at €11.21 on the back of stronger than expected results for 2013, with volume growth in its global performance nutrition division leading to a rise in revenue to €3.3 billion.

Bank of Ireland had a turbulent day, with stocks falling 4 per cent at one stage before recovering somewhat towards the end of the afternoon, closing down 2.8 per cent at 31.5c.

Mining company Kenmare Resources slid 7.5 per cent to 16.1c after reporting pre-tax losses of $42.09 million for 2013. Investor confidence remains unsteady after the Irish and London listed company issued a vague guidance for 2014, with concerns remaining over power supply at the Momo Mine in Mozambique.

The FTSE 100 Index slid 64.6 points to a one-month low of 6620.9, led down by security firm G4S . The company sank 5.3 per cent to close at 232.5 pence in brisk trade after agreeing to repay £108.9 million to the British government after overcharging it on a contract to tag criminals. The agreement followed the announcement of a £170 million full-year loss, significantly below market forecasts.

Shares at insurer Prudential rallied 3 per cent to 1398p after operating profits rose 17 per cent to £2.95 billion and it announced a new 15-year deal with Standard Chartered to extend the pair’s life assurance partnership.

Discount retailer Poundland made strong progress on its first trading day after its shares rose 23 per cent to 370p, giving it a market value of more than £920 million.

Shares of companies most exposed to Russia were among the biggest losers of the day as the European Union agreed the wording of sanctions against Russia, including travel restrictions and asset freezes against those responsible for violating the sovereignty of Ukraine.

The three firms derive 26 per cent, 22 per cent and 17 per cent respectively of their revenues from Russia, according to data from MSCI.

US stocks changed little, as equities recouped much of their earlier declines amid signs of progress in diplomatic attempts to ease tensions surrounding Ukraine.

Fashion retailer Express Inc dropped 11.3 per cent to $16.18 after the company reported fourth-quarter earnings and forecast a profit for the current quarter that fell far short of analyst expectations.

Biopharmaceutical giant Oxigene Inc surged 103.7 per cent to $4.93 as the company reported its experimental drug Zybrestat, combined with Roche’s cancer drug Avastin, significantly slowed progression of recurrent ovarian cancer. Geron Corp plunged 63.2 percent to $1.82 as the US Food and Drug Administration ordered a halt to trials of its cancer drug imetelstat over concerns about potential liver damage.

1 Up or down – how much is your Local Property Tax this year?
2 Am I crazy to consider switching to an Ulster Bank mortgage?
3 PTSB sells €1.4bn of buy-to-let mortgages to Citigroup
4 How much state pension will I get next year?
5 Brexit to curb services trade with UK, accountants group warns
6 CRH sells Brazilian cement business for $218m
7 Mortgage drawdowns fall by almost a third compared to 2019
8 HSBC to overhaul business model as profit tumbles 35%
9 Oxford Covid vaccine trials offer hope for elderly
10 Tesco takes to the skies with home delivery by drone
Real news has value SUBSCRIBE