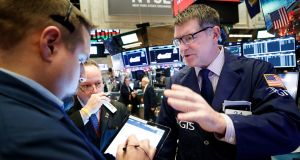 NYSE traders work on the floor at the start of the trading day, December 9th. Photograph: Epa/Justin Lane

Food group Kerry closed on Monday at €117.50, a 0.43 per cent increase. The group has hired Wall Street broker Goldman Sachs to advise on it on a €22.5 billion bid for part of US chemical giant Dupont in what could be the biggest ever deal done by an Irish-listed company.

The two main banks inched ahead after dealers said that large number of shares were traded in both on Monday. AIB closed 0.5 per cent up at €3.198 after hitting a high of €3.24. More than 5.4 million of its shares traded.

Bank of Ireland ended the day at 0.29 per cent up €4.806 after about two million of its shares changed hands.

Building materials giant and index heavyweight CRH dipped 0.54 per cent to €34.90. In a related industry, insulation specialist Kingspan shed 1.28 per cent to €50.20.

Tullow Oil’s shares collapsed more than 70 per cent on Monday after it reported production difficulties at several fields and two executives walked. The Irish-founded exploration group’s shares tumbled 71.75 per cent to 39.94 pence sterling on the news. The company revealed that oil from discoveries off the coast of Guyana in South America was heavy and high in sulphur, making it more costly to extract. Meanwhile, technical problems have slowed work at its key production fields in Ghana.

Tullow also said that it would scrap its dividend. The news dragged Premier Oil down 6.52 per cent to 88.28 p.

Meanwhile, Woodies DIY owner and builders’ provider Grafton added 3.29 per cent to 862.5p. A significant share of the Irish company’s sales come from the UK and continent while its only stock market listing is in London.

Supermarket chain Tesco advanced 4.65 per cent to 243.1p, as the group announced a review of its businesses in southeast Asia, making it top performer in the blue-chip FTSE 100 index.

In a related business, department store chain Marks & Spencer gained 3.53 per cent to 208.3p on news that analysts at stock broker Goldman Sachs upgraded their view of the stock’s prospects.

Air France KLM’s price fell 0.58 per cent to €10.21 outperforming other airlines despite its dip in value. Dealers said that news at the weekend that the group increased passenger numbers in November helped prop up the price.

German lighting manufacturer Osram climbed 15 per cent to €44.24 as speculation grew that sensor specialist AMS could make a higher offer to Osram shareholders to persuade them to sell.

Wall Street’s main indices fell in afternoon trading on Monday, with investors keeping a close watch on US-China trade relations as planned tariffs on Chinese imports into the US kick in on December 15th.

3M Co fell 0.7 per cent after Citigroup cut its rating on the industrial conglomerate’s shares.

Apple suppliers Qorvo Inc and Skyworks Solutions Inc rose about 2 per cent each, after Bank of America Merrill Lynch upgraded shares of both companies.

Merck & Co dipped 0.2 per cent after the drugmaker said it would buy cancer drug developer ArQule Inc for $2.7 billion in cash. Shares of ArQule doubled in value following the news. Additional reporting - Reuters