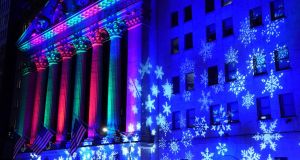 European shares closed higher on Friday, extending gains after impressive US jobs data gave a boost to market sentiment. Investors were already in an upbeat mood after positive statements from Washington about its trade talks with China.

Data showed US job growth increased by the most in 10 months in November, confirming that the economy remained on a moderate expansion path. That helped quell some fears of a negative rub-off on growth from a trade war with China.

Providence Resources was flat in Dublin trading but rose 8.6 per cent on its London listing after the exploration company’s chief executive Tony O’Reilly jnr stood down with immediate effect.

The FTSE 100 posted its best day in more than four months, climbing 1.4 per cent as sterling weakened, helping its export-focused stocks. Over the week, however, the FTSE posted its worst loss in two months.

Banking and mining stocks had a good Friday, while other notable performers included advertising company WPP, which climbed 3 per cent on plans to return about $1.2 billion to shareholders, and Penneys owner Associated British Foods, which added 2 per cent after it maintained its earnings target.

Marks & Spencer rose 4.1 per cent after analysts at JP Morgan upgraded the retailer’s stock to “neutral” from “underweight”.

Housebuilders, sensitive to Brexit jitters due to their domestic exposure, jumped 1.4 per cent after mortgage lender Halifax said UK house prices had risen in November at the fastest annual rate in seven months.

The pan-European Stoxx 600 index finished up 1.2 per cent, a gain that helped erase nearly all of a tumultuous week’s losses. Stocks swung wildly this week on conflicting statements and reports regarding the progress of US-China trade negotiations, as well as some weak economic indicators from Europe.

In France, the Cac 40 rose 1.2 per cent, while the German Dax closed up 0.9 per cent. Limiting gains on the Frankfurt index were figures showing Germany’s industrial output unexpectedly dropped in October, reviving worries over the growth outlook for Europe’s economic powerhouse.

Among other stocks, shares in Ipsen slid 13.6 per cent after the French pharmaceutical company put on hold clinical studies of palovarotene, which treats bone disorders.

Ulta Beauty jumped 13 per cent, the most among S&P 500 companies, after the cosmetics retailer beat quarterly profit expectations. 3M gained 3.7 per cent after a report said the company was exploring a sale of its drug delivery systems business which could fetch about $1 billion.

However, Uber Technologies was down about 2 per cent in early trading after it disclosed there had been more than 3,000 reports of sexual assault related to its 1.3 billion journeys in the US last year. – Additional reporting: Reuters.