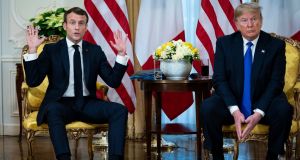 French shares gained 1.3% after US leader Donald Trump and French counterpart Emmanuel Macron said they hoped to smooth out their differences over a digital services tax

European shares closed higher on Wednesday after US president Donald Trump said trade talks with China were going “very well” and Bloomberg reported that both sides were closer to agreeing on the amount of tariffs that would be rolled back in a phase one deal.

Sentiment was underpinned by a mounting conviction in the market that UK prime minster Boris Johnson’s Conservative Party will secure a majority in the election next week and push his Brexit deal through parliament.

Banking stocks were among the main gainers, with AIB up 5.8 per cent at €3.10, and Bank of Ireland gaining 3.1 per cent to €4.65 amid increasing optimism that the UK will avoid a no-deal Brexit.

Fellow Brexit-sensitive stocks were also in demand, with Ryanair rising 2.1 per cent to €13.88, and Irish Continental Group advancing 1.7 per cent to €4.43.

Hopes of a Conservative majority in the December 12th election helped blue-chip firms with more exposure to Britain such as housebuilders to advance, and the FTSE 250 surged 0.7 per cent.

News-driven moves were in short supply and limited to smaller stocks. AIM-listed M&C Saatchi tanked 47 per cent to its lowest in more than a decade after the ad agency warned on annual profit for the second time in less than three months, and revealed that accounting issues at the company were worse than previously thought.

Fast-fashion retailer QUIZ skidded 7.3 per cent after its half-year earnings plunged, another reminder of sluggish demand that the UK retail sector is grappling with.

By contrast, Stock Spirits added 9.3 per cent on its best day since August, after its annual profit more than doubled on strong demand for its premium brand vodka in Poland and the Czech Republic.

Trade-sensitive German shares were up 1.2 per cent, logging their biggest percentage gain in a month. Chipmakers such as Infineon Technologies and STMicroelectronics gained more than 1.4 per cent after upbeat earnings forecast from US peer Microchip Technology.

French shares gained 1.3 per cent after Mr Trump and French counterpart Emmanuel Macron said on Tuesday that they hoped to smooth out their differences over a digital services tax. Washington has threatened 100 per cent tariffs on French champagne, handbags and other products if France proceeds with the proposed tax on big technology companies.

Luxury stocks such as LVMH, Kering and Hermes firmed by between 0.6 per cent and 1.5 per cent, enjoying some respite after a rough day on Tuesday because of Mr Trump’s tariff threat.

A big faller was French telecoms company Orange, which slid 4.7 per cent after traders pointed to disappointment over the firm’s dividend outlook.

Wall Street’s main indexes looked set to break a three-day losing streak on renewed hopes of a US-China trade accord.

“I think the president wants and needs a trade deal before the election, not after,” said Brent Schutte, chief investment strategist at Northwestern Mutual Wealth Management Company. “He needs to have something to take to the electorate in 2020.”

Alphabet rose after it said Sundar Pichai, who has run its core Google search business since 2015, would take the reins as chief executive of the parent company.