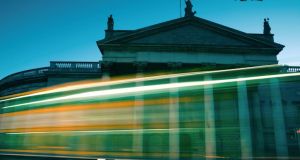 Bank of Ireland strategists said volatility was set to pick up further this year for both bond and stock markets.

Stock investors, rattled by a 9 per cent drop in global markets over the past two weeks, should get used to more volatility and a sharp drop over the long term in annual gains, according to fund managers and strategists at Bank of Ireland (BoI).

Speaking to The Irish Times on Tuesday, BoI Investment Markets’ head of investment management, Leona Nicholson, said 2017 was “extremely unusual” as equities, measured by the MSCI All-Country World Index, had only a 6 per cent correction at one stage as it continued, otherwise uninterrupted, to new highs. The index ended the year up 22 per cent to hit a then new record.

“The returns that we’ve seen in the last number of years – [averaging] 15 per cent per annum since 2009 – are no longer achievable,” said Ms Nicholson, who runs a €320 million global fundamentals equities fund, predicting that global stock gains would move back to an average of 6 per cent a year over the next decade.

JJ Walsh, head of trading group strategy at BoI Global Markets, said volatility was set to pick up further this year for both bond and stock markets, having fallen in 2017 to lows not seen in decades, as investors reached a place of “peak complacency”.

Global market have been hit in recent weeks by the prospects of strong economic growth fuelling inflation and a faster rate of monetary policy tightening than had been expected, which ultimately would impact corporate earnings. Investors were particularly shaken by a spike in US non-farm payrolls data for January, released on February 2nd, which may lead to the pace of rate hikes by the US Federal Reserve accelerating.

“Monetary policy is becoming less accommodative on a global level and that’s because the global economy is doing so well,” Mr Walsh said. He added that the quantitative easing bond-buying programmes by major central banks, which peaked last March, were set to turn negative at the end of this year as the Federal Reserve reduces assets on its balance sheet by $50 billion a month and the European Central Bank is likely to stop buying bonds.

Meanwhile, Vincent Crimmins, head of foreign exchange and emerging markets strategy at BoI Global Markets, estimated that the dollar, which has weaken by about 19 per cent against the euro since the end of 2016 to about $1.236, was likely to decline further this year, to about $1.27, as the European economy continued to pick up.

Mr Crimmins sees the euro strengthening to above 90p this year from 88.9p currently as the UK political and weakening economic backdrop remain in focus as Brexit negotiations continue.

1 Basic income for all: Has the Covid crisis given us a new economic model?
2 ‘I don’t need to do any of this. . .I don’t actually need to work.’
3 AIB revives €1bn-plus problem mortgages sale
4 Central Bank rules out changes to mortgage rules during pandemic
5 Direct sea routes to Europe offer certainty in choppy Brexit waters
6 Promontoria barred from pursuing doctor over Ulster Bank loan
7 Only way is up for Stripe as valuation skyrockets
8 Picking winners: is diversification blunting investment returns?
9 Electric propulsion slowly wings its way to aviation
10 BOI customers to be charged twice with bank fees on New Year’s Eve
Real news has value SUBSCRIBE