Dow opened higher while S&P index was down slightly 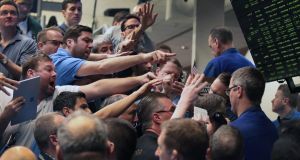 European stock markets were largely trading higher on Wednesday afternoon despite markets remaining on edge as Asian equities pared their advance US markets were mixed at the open.

Ireland’s Iseq overall index was, however, bucking the wider European trend at lunchtime and was trading lower but had recovered some ground by 2:45pm and was up 0.74 per cent.

Among the lunchtime losers were packaging company Smurfit Kappa, Ryanair and AIB, all down by between 3.86 and 2.46 per cent.

There was very light volume on the positive end of the Iseq with the exception of Glenveagh properties which had almost 3.4 million trades executed by lunchtime and was trading up by 0.3 per cent.

The wider pan-European Stoxx 600 index was also in the green, up by 1.31 per cent. Investec and Dealz-owner Steinoff were among the winners.

The US stock market remained fragile, with shares fluctuating and volatility measures double levels from last week as investors come to grips with strong economic growth that may accelerate the removal of monetary stimulus.

Treasuries rose, pinning the 10-year yield below 2.80 per cent, while the dollar advanced. The Cboe Volatility Index, a measure of market anxiety, held near 27, about twice what it was a week ago.

Some investors fear that the market is over-stretched in the context of higher inflation and rising bond yields as central banks withdraw their easy money policies of recent years.

Yields on Germany’s 10-year government bond, the euro zone benchmark, were around 0.69 per cent, having dropped to 0.66 per cent on Tuesday. But that yield has more than doubled since early-December as the European Central Bank halved bond purchases at the start of 2018 and is expected to completely wind them down in September.

Earlier in Asia, Japan’s benchmarks eked out slim gains at the close after retreating from the session’s highs, while Chinese shares dropped. The dollar was flat as most commodities rallied.

Amid a slew of calls to “buy the dip,” investors will be watching Wednesday’s auction of 10-year Treasuries for clues on where markets go from here.