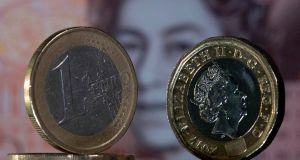 Sterling reached its highest level in more than five months against the dollar at $1.3011 on Monday while staying close to a five-month high against the euro, as more investors rushed to cover short positions on signs that either prime minister Boris Johnson’s Brexit deal would pass or the October 31st deadline would be pushed back.

In any event, the risks of Britain exiting the European Union without agreeing a transition deal - a no-deal Brexit - now appear so small that more investors are buying both pounds and UK-focused equities. Sterling had earlier pulled back half a percent after parliament delayed a crucial Saturday vote on Johnson’s Brexit deal on Saturday.

But the currency held most of the 6 per cent gain chalked up since October 10th. Mr Johnson could now pass the deal by either winning a “meaningful vote” on Monday - if the lower house speaker allows a vote to go ahead - or by securing a majority when the Withdrawal Agreement Bill is introduced on Tuesday. The pound rose to trade around flat after a Democratic Unionist Party MP said it would not support any amendments providing for a customs union with the EU. Some interpreted that as suggesting they would support Mr Johnson’s Brexit deal. Earlier the pound traded around $1.2985 against the dollar , just off its five-and-a-half-month high. While against the euro, it reached 85.91 pence but stayed slight off llast week’s five-and-a-half-month high. Analysts said that while the DUP’s comments appeared to have been the catalyst for the latest move, the market was being driven by investors scrambling to buy the currency before it rallied further, especially those who were “short” the currency. “There is a FOMO in the market, fear of missing out, so everyone wants to be on the right side of the trade. We know sterling will appreciate if we get a deal and no deal is now unlikely ... so that’s slightly skewing the bets,” said Morten Lund, strategist at Nordea Markets. “If they don’t get the customs union through, (parliament) might pass the deal, that’s why the sterling is moving higher,” he added.

The optimism was also reflected in stock and bond markets. Mid-cap London-listed shares edged higher after first dropping 0.3 per cent. Yields on British government bond yields rose 5 to 7 basis points across the curve . Uncertainty still lingers. The government says Britain will leave the EU on October 31st regardless of the amendment passed on Saturday that forces Mr Johnson to seek a Brexit delay. French junior economic minister Agnes Pannier-Runacher also said the UK could still leave in 10 days. “I think markets are really trying to feel their way through this, but you don’t want to be caught short the pound at this point,” said Ned Rumpeltin, European head of currency strategy at TD Securities. – Reuters