Shares up as investors show confidence in Greek reforms 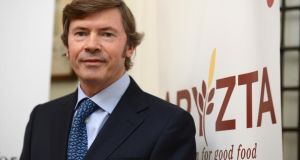 Owen Killian, chief executive of Aryzta: the Swiss-Irish food group closed the day up 3.7 per cent to €44.89. Photograph: Cyril Byrne

Investors’ belief that Greece will pass reforms in order to get a new bailout also enabled European stocks to record a fifth day of gains.

The STOXX Europe Oil & Gas Index rose 0.8 per cent, with Statoil among the best performers in percentage terms on the pan-European FTSEurofirst 300 index. The FTSEurofirst closed up 0.5 per cent at 1,580.34 points, the fifth day in a row in which it has risen.

Across the Atlantic, weak retail sales data failed to ruin the mood on Wall Street as US stocks headed for their first four-day winning streak since January.

The Iseq index of leading shares followed other European indices higher on what was described as a quiet day.

Swiss-Irish food group Aryzta, which has seen its share price tumble in recent months, closed the day up 3.7 per cent to €44.89. While still considerably lower than the €73 mark the Cuisine de France owner hit in March, some traders are suggesting that the share price may finally be bottoming out.

Dragon Oil was one of the other main movers of the day, closing up 3.5 per cent to €10.20. Local analysts said the change in share price was due to currency fluctuations rather than to the exploration company’s announcement that production output rose in the first half.

Iseq heavyweight CRH had something of a lacklustre day with its shares closing virtually unchanged at €26.34.

Britain’s top share index closed higher, with broadcaster Sky climb leading the way and energy stocks bouncing back as crude oil rose. The FTSE 100 index ended the day 0.2 per cent higher at 6,753.75 points, extending a 1 per cent rise on Monday when markets welcomed a Greek debt deal. Shares in Sky rose 4.1 per cent, the biggest gain in the index, after Deutsche Bank upgraded the stock to “buy” from “hold”.

Housebuilders lost ground after Bank of England governor Mark Carney said the time was getting closer for the first increase in interest rates since the financial crisis.

JP Morgan also reduced its price target on Volkswagen, whose shares declined by 2.1 per cent.

The FTSEurofirst is up about 15 per cent since the start of 2015 while the Euro STOXX 50 is up 14 per cent, with economic stimulus measures from the European Central Bank (ECB) having helped to support markets despite the worries over Greece.

Twitter jumped 2.6 per cent to $36.72 after a report, purportedly from Bloomberg, that the company was made a $31 billion offer. The stock quickly gave up most of its gains after Bloomberg said the report was fake.