Markets burst into life on hopes of coronavirus vaccine 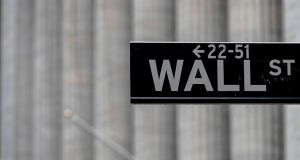 Global equity markets surged yesterday and oil rallied to highs last seen in mid-April as data from a potential Covid-19 vaccine trial by US group Moderna lifted both sentiment and hopes of a faster recovery from the coronavirus-driven economic slump.

The Iseq was a sea of green as it drove ahead with a rise of 6 per cent.

Ryanair shares surged 15.8 per cent to €9.78 after Europe’s largest low-cost carrier announced details of sharp cost cuts and promised a swift return to full capacity and expansion in the aftermath of the Covid-19 crisis.

Other Irish multinationals that stand to benefit from a boost to global trade also performed strongly. Paper and packaging giant Smurfit Kappa rose 7.3 per cent to €29.26. Kerry Group was up 2 per cent to €103.90.

Dalata, the largest hotel operator in the State, was ahead by more than 14 per cent by the end of the session at €2.88 per share. Hospitality companies have the most to gain from any potential vaccine.

The FTSE 100 index recorded its strongest performance since late March yesterday. It closed up 4.3 per cent after ending Friday with its first weekly slide in three.

BP and Royal Dutch Shell gained more than 8 per cent each, as signs of higher demand drove oil prices to a one-month high.

Precious metals miner Hochschild jumped 12 per cent after saying it would restart its Peru operations in the coming weeks.

European shares enjoyed their best day in nearly eight weeks , with cyclical sectors soaring as an easing of lockdowns and the encouraging report on a potential vaccine.

Miners leapt 8 per cent, leading Europe’s sectoral gains, while carmakers, oil and gas and travel and leisure indexes – typically reliant on the health of a global economy that has taken a battering due to the coronavirus crisis – gained between 6.5 per cent and 7.9 per cent.

Germany’s auto-heavy DAX surged 5.7 per cent to its highest level in over two weeks, while France’s main index rose 5.2 per cent.

The single biggest boost to the Stoxx 600 was France’s Total, which surged 7.4 per cent after it agreed to buy assets from Energias de Portugal.

French automakers Renault and Peugeot gained 8.7 per cent each after finance minister Bruno Le Maire said the government was hoping to announce a plan within 15 days to help the country’s carmaking sector.

US stocks jumped yesterday, and the S&P 500 closed at a 10-week high, on encouraging early-stage data for a potential coronavirus vaccine and on the promise of more stimulus to lift an economy beaten down by the pandemic.

After rallying more than 32 per cent from a multi-year low in March, the S&P 500 had been trading in a tight range in May as investors weighed the hopes of an economic recovery against the fears of another wave of infection as states lifted virus-led restrictions.

“The fact that Moderna came out with the phase-1 trial that seems to be positive, that certainly is igniting the storm,” said Ken Polcari, chief market strategist at SlateStone Wealth LLC in Florida. “That will ignite the storm because if there is a vaccine then all this uncertainty about the economy and the virus goes away.”