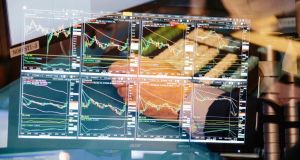 European bank stocks lagged most of their peers, as growing discord between Germany and the ECB cast doubts over certain ECB asset purchasing programmes. Photograph: The New York Times

European shares closed higher on Friday, clocking weekly gains as signs of improving US-China relations provided a fresh dose of optimism for investors counting on the easing of lockdowns to spark a recovery in global growth. The pan-European Stoxx 600 closed up 0.9 per cent, with dialogue between US and Chinese officials over their phase-one trade deal soothing investor about a renewed trade spat. Car stocks, which rely heavily on China as a market and a production hub, led gains for the day, rising nearly 3 per cent. Strong earnings also helped, with ING Groep, the largest Dutch bank, adding 3.6 per cent as it posted first-quarter pretax earnings that beat market expectations. Siemens rose 4.8 per cent after the German industrial company announced cost-cutting plans to deal with the impact of the pandemic following an 18 per cent drop in industrial profit in the second quarter.

London markets were closed for a public holiday.

The Iseq index rose 1.5 per cent to 5,507 in line with other European bourses. AIB led the upward trend, rising 9 per cent to €1.08. AIB shares have been one of the worst hit among European peers. The stock is trading at about a third of the price seen before the crisis. Rival Bank of Ireland was marginally up at €1.64. Glenveagh Properties was marginally down at 60 cents but held on to most of the gains from the previous session, when its shares were lifted on foot of reports that people were still buying homes in its developments despite the lockdown.

Ryanair, which has taken a battering along with other airline stocks, rose nearly 2 per cent to €9.49 as its chief executive called on the Government to take action and reverse “unjustified parking charges” which are imposed on aircraft grounded at Dublin Airport.

Bourses in Frankfurt and Paris rose 1.4 per cent and 1.1 per cent respectively. The Stoxx 600 added about 1.1 per cent for the week, as a series of better-than-expected earnings helped distract investors from a continued stream of weak economic readings due to coronavirus.

Basic resources stocks were the best weekly performers among the European subindexes, as optimism over the gradual reopening of economies and robust Chinese trade data pushed up commodity prices.

On the other hand, bank stocks lagged most of their peers for the week, as growing discord between Germany and the European Central Bank cast doubts over certain ECB asset purchasing programmes.

Italy for instance, depends heavily on one of the programmes to keep borrowing costs down, and with the country set for its worst post-war recession, its lenders face a surge in bankruptcies. The country’s bank-heavy index lost 1.5 per cent for the week, as markets await decisions from rating agencies DBRS and Moody’s on Italy’s sovereign debt.

“As we do not expect a downgrade by Moody’s, the likelihood is that we will see a solid start on Monday,” UniCredit analysts wrote in a note. German military equipment and auto parts group Rheinmetall ended largely flat after it forecast significantly lower sales and profits this year due to the pandemic. Norwegian insurer Storebrand shed 2.9 per cent after Kepler Cheuvreux downgraded the stock to “reduce”.

US stock markets gained on Friday after data showed the economy lost fewer jobs in April than feared due to the coronavirus crisis, adding to optimism from an easing in tensions between Washington and Beijing. Financial stocks tracked a rise in treasury yields, while energy stocks jumped on the back of higher oil prices. Disney rose 2.1 per cent as tickets for the earliest days of Shanghai Disneyland’s re-opening in China sold out rapidly.

Uber Technologies jumped 3.9 per cent as the company said its ride service bookings recovered in recent weeks and that it expects a coronavirus-related slowdown will delay the goal of becoming profitable by a matter of quarters, not years. Boeing rose 3.3 per cent as chief executive David Calhoun said in an interview with Fox Business News that the planemaker expects to start production of the grounded 737 Max jet this month. – Additional reporting: Reuters