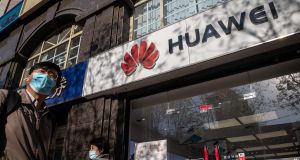 A Huawei shop in Beijing. Photograph: Nicolas Asfouri/AFP via Getty

However, a slump in technology stocks sent Wall Street’s main indices lower, as signs of deteriorating trade relations between the United States and China added to economic worries due to the novel coronavirus pandemic.

The Iseq all-share index just about stayed in the black for the session, as its big guns mostly failed to fire on Friday.

Bank of Ireland rose almost 1.5 per cent to €1.44 per share, a day after it priced a subordinate bond that appears to have been heavily oversubscribed. The bank also announced it would be cutting about 100 temporary staff as a cost-cutting measure due to the Covid-19 crisis.

Kingspan rose by more than 3.3 per cent to €49.48 per share. The insulation group looks set to get a boost from the fact that construction is among the industries first back to work after lockdown is eased in many countries.

Troubled Irish-Swiss bakery company, Aryzta, fell yet again – by 2.8 per cent to about 30 cent per share. The company is undergoing another strategic review, and a posse of activist shareholders are prominent on its register.

Ryanair fell almost 2 per cent to €8.45, as the airline’s chief executive, Michael O’Leary, complained that one of its main competitors, Lufthansa, was like “a drunk uncle at a wedding” in the way it was lapping up State aid. Several of Ryanair’s competitors will receive public money boosts while Ryanair will not.

The hopes for European economies and boosts to London’s listed mining stocks helped the Ftse 100 close the day up 58.23 points, or 1 per cent.

In company news, Royal Mail shareholders welcomed the departure of chief executive Rico Back with immediate effect after less than two years. Even a £1 million payout was not enough to dampen spirits, with shares closing up 13.6p at 175.95p.

Investors in William Hill were happy at bosses revealing plans to open betting shops again, along with positive momentum in the developing US market. Shares closed up 8.6p at 115.35p, despite executives declining to reveal when the first shops were likely to start inviting customers back.

Eight of the 11 major S&P sectors were lower, with property and utilities posting the biggest percentage declines. Healthcare, consumer staples and energy stocks were the only ones higher.

Abbott Laboratories slipped 2.6 per cent after the US Food and Drug Administration said the company’s speedy coronavirus test could potentially be inaccurate but could still be used to test patients.

After US president Donald Trump moved to block semiconductor shipments to Chinese company Huawei, China’s countermeasures included launching investigations and imposing restrictions on US companies such as Apple, Cisco Systems and Qualcomm, as well as suspending purchase of Boeing airplanes, the report said, citing a source.

Heading into the afternoon session, Boeing had fallen 2.9 per cent and Apple was down 2 per cent. The trade-sensitive Philadelphia chip index slumped about 3.7 per cent, while the S&P technology sector dropped 1.5 per cent.