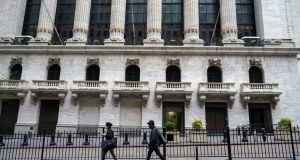 Stock markets slid on Wednesday as fears about a second wave of coronavirus infections and as warnings from US Federal Reserve chairman Jerome Powell that the US faces a “significantly worse” recession than any since World War II weighed on investor sentiment and boosted safe-haven bonds.

Mr Powell’s comments come as parts of the global economy are starting to reopen following a deep freeze aimed at curbing the spread of the virus that has pushed unemployment rates to their highest since the Great Depression. Benchmark equity indexes are up 25 per cent or more since their March lows in anticipation of further government stimulus programs to help the global economy recover.

“Earnings season is largely behind us and we have entered the phase two of Covid-19 as deconfinement of economies begins, and that is creating a lot of uncertainties on a daily basis, which is weighing on markets,” said Francois Savary, chief investment officer at Swiss wealth manager Prime Partners.

“We don’t think this is the start of a new correction. Markets went too far, too fast and this is the consolidation.”

MSCI’s gauge of stocks across the globe shed 0.34 per cent following broad losses in Europe and Asia.

In morning trading on Wall Street, the Dow Jones Industrial Average fell 0.46 per cent, the S&P 500 lost 0.19 per cent and the Nasdaq Composite added 0.15 per cent.

Oil markets, which have plummeted this year due to a combination of a collapse in demand and a supply glut, regained some ground on expectations of deeper production cuts. – Reuters