Bank of Ireland jumps 6.1% and companies exposed to US for profits also in demand 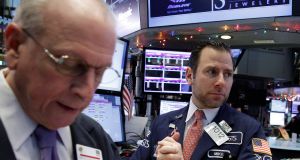 Traders work on the floor of the New York Stock Exchange. Wall Street investors viewed the Federal Reserve’s interest rate outlook as a sign of confidence in the economy. Photograph: Reuters

European shares rose on Thursday, with the Iseq in Dublin soaring 100 points above the level it was at before the Brexit referendum, as the euro tumbled to its weakest level since late 2002 against the dollar.

The currency move was driven by the Federal Reserve’s move on Wednesday to signal it is likely to increase interest rates three times next year, a faster pace than the market had been expecting.

The pan-European Stoxx 60 index rose by 0.9 per cent to close at its highest level since the start of January.

Bank of Ireland stood out as a particularly strong spot, jumping 6.1 per cent to 24.4c. Analysts expect bank earnings to rise globally in an environment of rising US interest rates and bond yields. Increasing bond yields would also help rein in the bank’s pension deficit.

Sky gained 0.5 per cent after Rupert Murdoch’s 21st Century Fox tabled a formal £11.7 billion (€14 billion) takeover offer for the broadcaster. The deal, which shareholders will still have to vote on, comes five years after the media tycoon’s last tilt at taking full control of the business through News Corporation.

Shares in Punch Taverns jumped 7.9 per cent on news that the pub operator has agreed to carve up its estate as part of a takeover by Heineken and private equity firm Patron Capital. The deal values Punch at £402.7 million.

Centrica added 5.6 per cent after the owner of British Gas and Bord Gais Energy upped its full-year earnings outlook and revealed it has stemmed the flow of energy customers quitting the business.

Also helping financials, Italian banks rose 4.4 per cent and were on course for a third straight week of gains.

The banks have staged a rebound since Paolo Gentiloni was appointed prime minister, on expectations that a stable political environment will help ailing banks to recapitalise.

The Italian government is reportedly ready to pump €15 billion into Monte dei Paschi di Siena and other ailing banks.

Spain’s Grifols rose 6.7 per cent after saying it would buy US Hologic’s assets in their blood-screening joint venture and refinance its net debt in the first quarter of next year. But French utility EDF fell 12.7 per cent, wiping about €2.5 billion from its market value, after warning of lower earnings in 2017.

Banking stocks were also among the main gainers, with JP Morgan, Wells Fargo and Bank of America advancing between 1.5 per cent and 2.5 per cent, while Goldman Sachs jumped 4.3 per cent.

However, Yahoo slumped by 4.8 per cent after the technology company disclosed a second massive data breach that raised fears Verizon might kill a deal to buy its core internet business. Verizon was up 0.7 per cent.