Dollar at highest against euro since 2003

Federal Reserve has signalled three rate hikes for next year 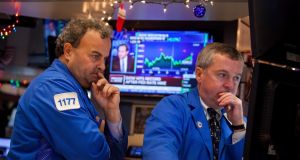 Stocks have rallied and bonds have weakened since Donald Trump’s election. Photograph: Bloomberg

The dollar climbed to the highest level since 2003 against the euro and gold plunged as the prospect of a steeper path for US interest rates filtered through markets. US stocks fluctuated after the worst day in two months.

The dollar extended its advance against major and emerging-market peers after the Federal Reserve’s first interest-rate hike of 2016 came with a signal of three increases next year. US 10-year yields reached the highest level in more than two years, while 30-year bunds led a decline in German securities. Gold tumbled 2.6 per cent to a 10-month low.

In Dublin, the overall Iseq was 1.1 per cent higher at mid-afternoon.

The Fed’s move marks a step in what is expected to be a shift away from global central-bank policy dominating financial markets toward a potential rise in fiscal stimulus.

While stocks have rallied and bonds have tumbled since Donald Trump’s election fuelled such expectations, the US central bank stands largely alone in actively tightening policy, a stance that’s sent the dollar surging. The Bank of England kept its key rate at a record low Thursday, a week after the European Central Bank extended quantitative easing.

“At the moment it feels like going long dollar is free money, no one loses,” said Stuart Bennett, head of Group-of-10 currency strategy at Banco Santander in London. “The market believes it can push for another two to three per cent relatively risk-free, a nice Christmas bonus. The market never appears to need a reason to be negative about the euro.”

Total bids received amounted to €1.331 billion which was 2.66 times the amount on offer. The treasury bills, which have a maturity of 12 months, were sold at a yield of minus 0.42 per cent.