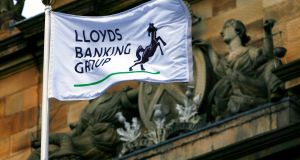 Lloyds Banking Group rose as investors digested news the government had reduced its stake in the bailed-out bank to just below 7 per cent. Photograph: David Moir/Reuters

US stocks reached all-time highs. The Dow Jones industrial average was less than 100 points away from the 20,000 mark, as a record-setting postelection rally showed no signs of fatigue.

Aryzta, the Swiss-Irish food group, rose 2.8 per cent after it began the first stage of a refinancing of its balance sheet. It issued €386 million of fixed and floating rate debt.

C&C, the Bulmers/Magners cidermaker, rose 0.55 per cent after a strong afternoon session. Investors warmed to the news it has extended its contract brewing and distribution partnership with Inbev. The deal should strengthen C&C’s prospects in the English and Welsh markets, where it has struggled to make an impact at times in recent years.

IRES, the only listed residential house investor and the country’s biggest residential landlord, fell 2.4 per cent after proposals were brought for Ministers’ consideration to cap rent hikes in Dublin and Cork.

Lloyds Banking Group also rose as investors digested news that the government had reduced its stake in the bailed-out bank to just below 7 per cent. More than £17.5 billion has been returned to government coffers since the lender’s £20.3 billion bailout.

Bellway shares rose 36p to 2,426p as the housebuilder said customer demand for new homes was strong as sales reservations rose 7 per cent.

Carpetright shares fell 15p to 185p as half-year pre-tax profits slumped 42 per cent to £4.1 million. The retailer warned that the collapse in sterling and “uneven” consumer demand is denting its performance.

Mediaset surged 31.9 per cent, the biggest gainer in Europe, after French media group Vivendi said it owned a 3 per cent stake in the Italian broadcaster and planned to raise that to as much as 20 per cent, fuelling expectations of a takeover bid.

UniCredit rose 15.9 per cent, its best day in more than six years, after unveiling plans to raise €13 billion in Italy’s biggest-ever share issue to shore up its balance sheet and shield itself from a broader banking crisis.

Elsewhere, Moller-Maersk surged 4 per cent. The world’s biggest container shipper said it might consider selling assets or cutting dividends as it seeks to retain its credit rating.

All the three major indexes hit fresh record highs shortly after the open. The Dow has risen about 8.6 per cent since November 8th, with President-elect Donald Trump’s expected agenda of economic stimulus and reduced taxes and regulations fuelling a rally.

Heading into the afternoon, eight of the 11 major S&P sectors were higher, with the technology index’s 1.61 per cent jump leading the advancers. The index fell 0.5 per cent on Monday after posting its largest weekly advance in a year last week.

Apple was up 2.1 per cent and provided the biggest support to the S&P and Nasdaq, while IBM rose 2.3 per cent, helping lift the Dow. Other tech giants Microsoft and Amazon were up 1.7 and 2.7 per cent, respectively.

Inovalon Holdings fell as much as 37.7 per cent to a life-low of $9.52 after the healthcare data analytics company’s fourth-quarter revenue forecast came in below expectations.