Markets watch for any indication of change to gradual rate increases 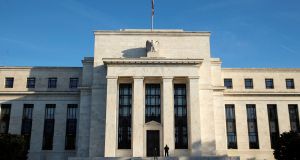 US Federal Reserve in Washington: chairwoman Janet Yellen has stressed to Congress that she does not want to jump the gun and make premature assumptions about the post-election shape of economic policy

The Federal Reserve on Wednesday will hold its final rate-setting meeting before US presidential-elect Donald Trump takes office. A quarter-point increase in the federal funds rate target range to 0.5 per cent-0.75 per cent has already been priced in by the markets, so the focus will be firmly on what happens to policy in 2017 and beyond.

The key question will be whether the Republicans will add fiscal fuel to an economy that is already near full employment, forcing the Fed to step up its ultra-sluggish pace of tightening. The message from the Fed on Wednesday is likely to be that it is too soon to know for sure.

What will the Fed say?

Markets saw more than a 95 per cent chance of a quarter-point rate increase going into the meeting, according to analysis of futures pricing from CME Group, so anything other than an upward move would be a big shock. Accordingly the markets’ initial focus will be on the Fed’s post-meeting statement, and accompanying forecasts.

The statement is likely to acknowledge the further decline in the unemployment rate to 4.6 per cent as well as the robust 3.2 per cent annual pace of gross domestic product growth seen in the third quarter. One measure of officials’ confidence is whether the Federal Open Market Committee changes its assessment of the risks to the outlook. The November statement found near-term risks were “roughly balanced”; if policymakers are becoming more confident they could extend that outlook beyond the short term, mirroring language in December 2015 when the Fed last lifted rates.

What about the forecasts?

This is critical. The so-called dot plot of policymakers’ interest rate forecasts in September plugged-in two increases for 2017 and three in 2018 and 2019. If there is an upward shift in the median dots in any of those years on Wednesday it could send a shiver through markets.

For most policymakers the outlook may well not have changed sufficiently from September for them to lift their growth, inflation and interest rate forecasts. But some might want to seize on the prospects for more expansionary fiscal policy in the next Congress and boost their rate forecasts – even though no one knows what kind of tax package will emerge from Capitol Hill in 2017.

Mr Trump has mooted a set of tax cuts that would send the US national debt rocketing. Republican politicians are vowing to be more conservative, but they could also end up signing their names to a deficit-increasing package of tax reforms, which could add momentum to the recovery at a time of full employment.

What will Yellen’s message be?

Fed chairwoman Janet Yellen has stressed to Congress that she does not want to jump the gun and make premature assumptions about the post-election shape of economic policy. Accordingly, her message may be characteristically cautious, re-emphasising the Fed’s determination to keep the pace of rate increases gradual.

But assuming the Fed lifts rates on Wednesday, the markets’ focus will be on trying to extrapolate whether the next rate increase comes as soon as the first quarter of 2017 and whether bigger budget deficits could herald a quicker tightening than the glacial, once-a-year pace now. The tone Ms Yellen strikes in the press conference starting at 2:30pm, half an hour after the Fed decision emerges, will be key.

This has been the slowest rate-lifting cycle for the Fed in modern times. Having initially forecast around four rate increases in 2016, the Fed is likely to push through only one. If there is a significant turnround in fiscal policy next year, however, the central bank will have to be quicker on its feet.