Investors could pay high price as equities continue to rally 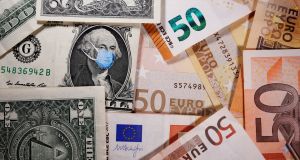 Take Chinese data published on Friday, showing the world’s second-largest economy contracted by an annual rate of 6.8 per cent in the first three months of the year as it grappled with Covid-19. The figures were worse than analysts’ beaten-down forecasts and marked the first contraction since the Chinese Cultural Revolution ended in 1976.

Asian and European equities markets took the figures in their stride and continued a rally that has been going on for past four weeks.

Or look at numbers out on Thursday showing that a record 22 million people in the US have signed on for unemployment benefits in the past month, wiping out all the jobs gained since the global financial crisis over a decade ago. Wall Street barely batted an eye, with leading equity indices advancing on the day.

Following a 33.6 per cent slump by the S&P 500 between late February – when it finally dawned on the Western equity markets that coronavirus was more than an Asian health issue – and the third week in March, the index of top companies in the US has rebounded by more than 25 per cent.

In Dublin, the 40 per cent slump in the Iseq index between February 24th and the trading session after St Patrick’s Day has also been followed by a 25 per cent rally.

The rebound has come even as most professional investors now appear to have abandoned hopes of a V-shaped economic rebound – a sharp downturn followed by an equally steep bounce-back.

The latest influential monthly Bank of America Merrill Lynch survey of fund managers, published this week, shows that 52 per cent of these professional investors are clinging onto the prospects of a U-shaped recovery. For many, that means a rebound kicking in during the second half of 2020.

The investment bank itself has boldly called its April survey findings as marking “peak pessimism”. That’s counts as a buy signal in most trading rooms. Investors may come to regret heeding that call.

The International Monetary Fund, which forecast on Tuesday that the global economy will shrink 3 per cent this year – the sharpest reversal in activity since the Great Depression more than 90 years ago – also highlighted in its latest semi-annual financial stability report that company analysts still have some work to do with their red pens.

“Downward revisions in earnings-per-share growth forecasts have been material in many markets, but, as of early April, likely do not fully reflect the extent of expected deterioration of corporate earnings outlook,” it said.

The latest earnings season got underway this week with US banks reporting a slump in first quarter earnings as they were forced to ring-fence billions of dollars to cover expected bad loan losses as they anticipate a surge in defaults from businesses and households. Citigroup set aside $4.9 billion in its loan-loss reserves, JP Morgan, $8.3 billion, and Bank of America, $3.6 billion.

Their results would have been much worse had Wall Street’s finest not benefitted from a surge in fees in their bond and equities trading divisions in March as market went into meltdown.

Retail lenders, like the Irish banks, won’t have such a cushion.

Few companies reporting figures in the coming weeks will be foolhardy enough to issue guidance to the market on their prospects in this environment.

The market rally in recent weeks has been fuelled by swift moves from central banks globally in the past month or so to slash rates and unveil over $6 trillion of stimulus efforts, as well as promises by governments to do whatever it takes. All of this, however, will come at a massive cost that markets haven’t begun to price in.

The extent to which exuberance has replaced fear can be seen in how investors on Friday bought into a leaked report on how an antiviral drug made by Gilead Sciences has produced positive results in a clinical trial in Covid-19 patients. That’s despite the fact that the US company has itself warned that it is too early to draw conclusions

Goldman Sachs’ top global stocks strategist, Peter Oppenheimer, said on Thursday that the market rally in recent weeks “is probably too rapid given the near term prospects that we see for the economic and profit data”.

But while Oppenheimer sees “downside risks” in the short-term, he forecasts “a strong sequential recovery in the economy and in profits from a very low base, starting in the second half of this [year] through to next year”.

The way that Western democratic government have been able to put much of the world into lockdown would have been unfathomable even two months’ ago. While this has slowed infection rates dramatically, isolation fatigue is setting in and politicians are under growing pressure to outline lockdown exit strategies.

With one eye on the November election, US president Donald Trump – who’s taken to running his daily coronavirus briefings as political rallies – announced three-phase “Opening Up America Again” plan on Thursday, on a day when the US’s growing Covid-19 death toll exceeded 33,000, or more than half the number of Americans killed during the entire Vietnam war.

Closer to home, Italy and Spain, the two European countries worst hit by the virus, have also begun to ease restrictions.

The big risk is that easing constraints too soon may force governments into reverse if Covid-19 cases spike again – resulting in a dreaded double-dip for the economy and markets.

1 Why are markets booming when a crash is on the way?
2 How much do Irish people earn? And what will Covid-19 do to our wages?
3 Drumcondra credit union collapses as merger plan fails
4 Could your old car be giving away all your secrets to its new owner?
5 Permission sought for €150m film and media campus in Wicklow
6 Home or car: what’s the best use of my savings?
7 British pound sinking to ‘emerging market currency’ status
8 Aryzta needs to sell €600m of assets to reset business, shareholders claim
9 Businesses given five days to get Revenue-ready for Covid-19 tax relief
10 Ryanair passenger traffic slumps 97% as shutdown restricts travel
Real news has value SUBSCRIBE