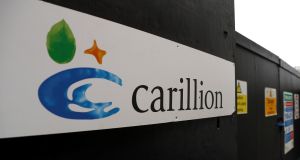 On the first day of a new trading week US markets were closed on account of Martin Luther King day. Meanwhile, Ireland’s benchmark Iseq overall index edged up by 0.08 per cent, beating its UK and European peers.

Both UK and European stocks fell on Monday, with Carillion’s collapse causing investors to establish the disruption that would occur to its joint venture partners such as Balfour Beatty and Galliford Try.

In Europe, cyclical stocks were among the biggest declines, while some competitors of Carillion rose on the back of its demise.

The closure of US markets on Monday meant there was light volume across Irish stocks.

There was a slight divergence in the performance of financials, with Bank of Ireland falling by 0.82 per cent while AIB increased by 1.1 per cent to €5.50. AIB had the strongest volume traded on the Iseq 20 index on the day.

While some European airlines, including Lufthansa and Air France, fell after having announced they bid for parts of the failed Alitalia business, Ryanair improved after saying it had record bookings over the course of the past week. The budget airline closed up by 0.63 per cent at €16.05.

Housebuilder Cairn Homes recovered after last week’s fall, albeit on very light volume. The stock ended up by 0.53 per cent.

Finally, the biggest Iseq 20 loser on the day was fruit and vegetable producer Total Produce, which fell by 2 per cent to €2.37, again on light volume with more than 333,000 shares traded.

The FTSE 100 fell 0.12 per cent, with Carillion shares suspended from trading after one of the biggest UK corporate failures in years.

The weakness in equities came as the pound currency held onto a strong gain marked up on Friday following a media report, later denied, that the Dutch and Spanish governments were open to a deal for Britain to remain as close as possible to the EU after Brexit.

Engineering firm GKN, trying to fend off an offer of 405 pence per share from turnaround specialist Melrose, led the blue-chip index with a 4.1 per cent rise.

Acacia Mining rose 1.5 per cent after it reported gold production in the last quarter of 2017 exceeded expectations.

BP and Royal Dutch Shell retreated 0.4 per cent and 0.3 per cent respectively as oil prices held just below December 2014 highs. Financials also weighed on the index, with Standard Chartered losing 2 per cent and HSBC 0.9 per cent.

Shares in some competitors of Carillion rose after the long-struggling construction and support services company collapsed, with banks refusing to lend it any more money. Serco jumped 7.3 per cent, Interserve 2 per cent and Kier Group 3.5 per cent.

While the STOXX index has seen a strong start to 2018 and has held at its highest levels since August 2015, weakness among banking and energy stocks kept the index in negative territory, while a stronger euro added pressure.

The pan-European STOXX 600 index ended down 0.2 per cent, while Euro zone blue chips ended little changed. Cyclical stocks, whose profits are most sensitive to the strength of the economy, have been the best equity sector performers this year. Finnish mining equipment maker Metso was the biggest faller on the STOXX, dropping 9.8 per cent after its fourth-quarter earnings missed expectations.

German retailer Metro fell 3.8 per cent after a sales update, with its Russian business showing a slowdown in sales in the Christmas quarter.

Shares in Azimut Holding were the top risers, up 12.7 per cent after the Italian asset manager said it would double its dividend as it reported record net inflows.

1 Over 400 complaints from migrant workers at meat plants lodged with WRC
2 Moving in and out of lockdown is a recipe for economic disaster
3 Coronavirus: We must save lives but we also need to live
4 Ufurnish: ‘It’s like Skyscanner, but for furniture’
5 Grounded Aer Lingus pilots develop fix for turnaround glitches
6 Mortgage agreements down by 31% in June but rates remain high
7 ‘Saudi Arabia is where the opportunities will happen in future’
8 Close to 300 Greencore sandwich workers test positive for Covid-19
9 ‘I love the place’: US billionaire John Malone on his €300m Irish portfolio
10 Management of Irish PR group Drury acquire agency from Omnicom
Real news has value SUBSCRIBE