European Stoxx 600 down 3.3 per cent, while US stocks show signs of fatigue 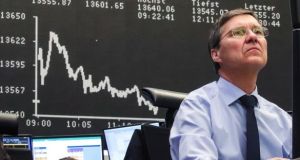 After leading the rebound this week, travel and leisure stocks fell 3 per cent in early trading

Stocks across the globe fell on Friday after a historic three-day run-up, with indexes poised to close the month and quarter with starkly negative performances.

The Stoxx Europe 600 Index was led lower by banks and real estate shares after the region’s leaders struggled to agree on a concrete strategy to contain the fallout of the pandemic. The index dropped 3.3 per cent over the session.

In Dublin, the Iseq index of shares fell almost 5.4 per cent over the day, dragged lower by edclines in banking and building stocks. AIB declined 7.4 per cent, while Bank of Ireland lost 6.5 per cent. CRH saw its stock fall 5 per cent, with Grafton dow 8 per cent. Ryanair shares dipped 4.7 per cent.

US stocks showed signs of fatigue after the fastest rally in nine decades as the coronavirus pandemic continued to roil markets.

The S&P 500 Index declined as much as 4 per cent Friday, giving back a portion of its 18 per cent surge over the previous three days. The equity benchmark is still headed for its best week in 11 years, though it remains 25 per cent off its February record.

The Cboe Volatility Index, the so-called fear gauge, is on track for a 10th straight close above 60. It averaged 18.7 in the past year.

Investors had piled back into the battered US equity market this week on speculation that an unprecedented $2 trillion relief package would offset the pandemic’s impact on the economy. A debate has ensued over whether that furious rally represented unwarranted optimism or the start of a long-term upswing. What remains clear is that the virus has ground the American economy to a virtual halt, with new jobless claims spiking above 3 million as large areas of the country remain virtually locked down to slow the spread of the infection.

A measure of US consumer confidence fell the most since 2008.

“The excitement of the last week has been the rolling out of this stimulus package, but we can’t lose sight of the fact that we’re not done yet,” said Kevin Caron, portfolio manager for Washington Crossing. “The data is going to look pretty darn bad the next couple months.”

Stocks are still up about 10 per cent for the week as Congress gathers to pass the stimulus package. The 10-year Treasury yield fell below 0.75 per cent. West Texas crude declined, setting up a fifth straight week of losses.

The recent revival of risk appetite looks sure to be tested by the continuing spread of the infection and the crippling effect of business closures. Tokyo is now seeing a surge in cases, while global deaths from the pandemic surpassed 24,000.

“It is by no means a given that volatility has ceased to be a feature of global equity markets,” said Paul Markham, global equities portfolio manager at Newton Investment Management. “Markets will oscillate between the reassurance that governments and central banks will be standing by to support them and the uncertainty of both the duration and depth of what will undoubtedly be a significant economic impact.” – Additional reporting: Bloomberg

1 If tourists are such pariahs should we not be testing them on arrival?
2 ‘My rent here is so low it’s a joke’
3 Varadkar and Donohoe to meet banks to discuss mortgage breaks
4 Belgium helps Ireland to a Brexit boon
5 Can Grafton Street stop the flood of closures?
6 WeWork on track for profits in 2021, says chairman
7 What is Covid Tracker Ireland?
8 Irish Rail losses up slightly despite record passenger numbers
9 This charming man: how Paschal Donohoe won the Eurogroup presidency
10 British pound sinking to ‘emerging market currency’ status
Real news has value SUBSCRIBE