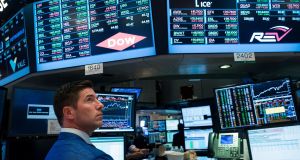 US stocks extended their losses in early afternoon trading on Tuesday, slipping from record levels, as a sharp drop in oil prices squeezed energy stocks and a rebound in technology shares faded out. Photograph: Drew Angerer/Getty Images

Stocks sensitive to the price of oil fell on Tuesday, putting pressure on European shares, with the pan-European benchmark ending lower after a strong start to the session.

Euro zone blue chips closed 0.4 per cent lower and the regional Stoxx index fell 0.6 per cent, retreating from a two-week high and giving up most of the gains made in the previous session.

Europe’s oil and gas companies fell more than 2 per cent with Royal Dutch Shell down 2.3 per cent and BP down 2.6 per cent after oil prices hit seven-month lows.

Mining shares fell more than 3 per cent. “People are once more paying attention to the fundamentals and the heavy oversupply that we’re seeing on the oil market, and that’s really causing some downside pressure,” said Jonathan Roy, advisory investment manager at Charles Hanover Investments.

Packaging giant Smurfit Kappa was another strong performer, rising 1.3 per cent to €26.90, which was in line with rising values in the sector.

Despite the fall in oil prices, Providence Resources rose to 18 cents while Paddy Power BetFair recovered Monday’s losses, rising 0.8 per cent to €98.

London’s blue-chip index sank on Tuesday after commodity stocks took a battering following a sharp drop in the price of oil. The FTSE 100 Index closed down 51.1 points at 7472.71, with the mining giants bearing the brunt of the sell-off as Brent crude slid 2.5 per cent to $45.74 a barrel.

Chilean copper miner Antofagasta was the biggest faller on the London market – falling more than 4 per cent or 37p to 755.5p – after rising oil output in Libya and Nigeria left traders fearing that Opec-led production cuts would have little impact on the global supply glut.

Glencore also took a hit, dropping 11.4p to 276.6p, while oil majors Royal Dutch Shell and BP were off 49.5p to 2,125.5p and 12.4p to 460.3p respectively. The oil price slump had shifted the top flight into a reverse following a morning rally triggered by dovish comments on UK interest rates by Bank of England governor Mark Carney.

Across Europe, Germany’s Dax dropped 0.6 per cent and the Cac 40 in France was 0.3 per cent lower. Among the stocks falling the most was Groupe Eurotunnel, which runs Eurostar trains; the shares fell 6 per cent after the second broker downgrade in as many weeks. Barclays cut the company to “sell”, citing slowing traffic and recent militant attacks, which could weigh on tourism.

US stocks extended their losses in early afternoon trading on Tuesday, slipping from record levels, as a sharp drop in oil prices squeezed energy stocks and a rebound in technology shares faded out.

Oil prices nose-dived to seven-month lows after news of increases in supply by several key producers, a trend that has undermined attempts by OPEC and other producers to support the market through reduced output. Oil majors Chevron and Exxon were down about 1.5 per cent and were among the biggest drags on the Dow and the S&P 500. The S&P energy sector’s 1.7 per cent fall led the decliners.

Elsewhere, Lennar rose 1.8 per cent to $53.66 after the number two US homebuilder reported a higher-than-expected quarterly profit. Dr Horton was up 1.3 per cent, while Pultegroup rose 0.7 per cent. Chipotle fell 6.3 per cent to $429.86 after the burrito chain said its operating costs in the second quarter will be slightly higher than the first quarter.