The markets are basking now in the afterglow of a Johnson electoral triumph. But for how long? 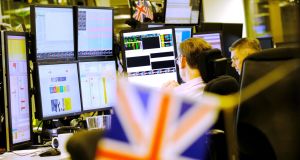 For financial market investors that have cheered Boris Johnson’s landslide victory in the UK general election, it might be worth casting their minds back to when he first came to power.

Johnson was cast as a bogeyman by markets when he seized control of the Conservative Party in late July, promising to get Brexit done in defiance of what he called “the doubters, the doomsters, and the gloomsters”.

Within three weeks sterling had fallen by almost 4 per cent against the dollar amid heightened fears that the former mayor of London would lead the UK out of the EU without a deal. That’s a seismic foreign exchange move for two powerful central bank reserve currencies.

Sterling also slid 4.6 per cent against the euro to a 10-year low of 93.2p during that period, while Dublin’s Iseq index, the most Brexit-sensitive national equities benchmark in Europe, plunged 10 per cent.

The accord that Johnson finally struck in Brussels in October against the odds would take the UK out of the EU, single market and customers union. It represents the hardest of hard Brexits envisaged immediately after the June 2016 referendum. Yet weighed against the prospect of the UK otherwise crashing out of the EU, it prompted a sustained rally by sterling and equities.

Sterling soared as much as 2.6 per cent against the dollar and 2 per cent compared to the euro within hours of an exit poll on Thursday evening pointing towards the Conservatives securing a their biggest majority since Margaret Thatcher clinched a third term in 1987.

The pound reached 82.8p against the euro, its highest level since shortly after the Brexit referendum (before which it was trading at 76.6p).

“‘Get Brexit done’, the winning motto, [has] led to a landslide victory for the Tory Party and Boris Johnson becoming the ‘champion of Brexit’,” said Olivier Konzeoue, a foreign exchange trader with Saxo Markets in London, adding that it has reduced the risk of a no deal to “zero”.

The Iseq soared as much as 3.6 per cent on Friday morning, led by Bank of Ireland, which jumped almost 11 per cent. Almost 40 per cent of the bank’s loan book is in the UK.

Dalata Hotel Group added 7.7 per cent on account of its growing UK business, coupled with a stronger sterling making Ireland a marginally cheaper place for Britons to visit.

The FTSE 250 index in London, which is more domestically focused than the export-oriented FTSE 100, shot ahead 5.4 per cent.

The consensus view in the markets is that Johnson will be able to sideline the radical Brexiteer wing of the Conservative Party that is the European Research Group and potentially strike a softer approach to Brexit as he enters the critical talks on the UK’s future relationship with the EU.

The next phase will be the trickiest. If Johnson doesn’t drop his pre-election pledge not to extend a transition period beyond the end of 2020, markets could turn ugly again quite quickly early next year.

Jim Reid, a markets strategist with Deutsche Bank, said that Johnson would only secure “a loose ‘harder’ relationship” with the EU if he refuses to budge on the transition phase deadline.

If he pivots and goes for a “more ambitions, ‘softer’ relationship, that will take time to negotiate, and will require an extension to the transition agreement”, he said in a note to clients on Friday.

While markets may ultimately prefer as tight a relationship between both as possible, a prolonged period of talks will lead to an extended period of uncertainty, which investors hate.

“Political signals about the UK-EU trade talks will continue to drive sterling volatility over the course of 2020,” according to Elliot Hentov of State Street Global Investors.

The result of the election may also have opened another Pandora’s Box that could unleash political and market turmoil.

Nicola Sturgeon moved swiftly after her Scottish National Party secured 47 of Scotland’s 59 seats in the House of Commons (with one of the 11 fresh SNP faces unseating Jo Swinson, the Liberal Democrat leader) to claim she had won “a renewed, refreshed and strengthened mandate” to call for a fresh independence referendum.

“There has been a strong endorsement in this election of Scotland having a choice over our future; of not having to put up with a Conservative government we didn’t vote for, and not having to accept life as a nation outside the EU,” she said.

In the North, where more nationalists than unionists were returned to Westminster for the first time since partition of Ireland in 1921, Sinn Féin has led fresh calls for a vote on a united Ireland even if Taoiseach Leo Varadkar warned that “people shouldn’t race ahead of themselves with other plans”.

The markets are basking now in the afterglow of a Johnson electoral triumph. But for how long?