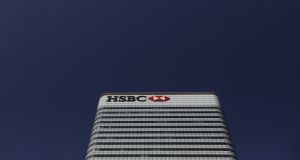 HSBC Holdings surged 11 per cent after its biggest shareholder raised its stake in a bet the embattled lender will return to paying dividends. Photograh: Simon Dawson/Bloomberg

European stocks jumped on Monday, led by a rally in bank shares, as investor sentiment was bolstered by M&A announcements. Asian equities and US futures gained, while oil retreated.

HSBC Holdings Plc surged 11 per cent after its biggest shareholder raised its stake in a bet the embattled lender will return to paying dividends. ArcelorMittal SA gained after Cleveland-Cliffs Inc. agreed to buy the company’s US operations.

Travel and leisure stocks rose, with Diageo saying it expects business to improve as bars and restaurants reopen after lockdowns. The dollar and euro were steady, while the yen ticked up. The Aussie rose after an influential economist walked back his call for an interest-rate cut to November from October.

Oil dropped below $40 a barrel in New York as a Vitol Group executive said uncertain demand could keep prices in check. In Asia, shares climbed in Seoul, Tokyo and Hong Kong. SandP 500 futures are pointing to gains after last week’s selloff.

Still, global equities remain on course for the first month of losses since March, amid mounting risks to the economic recovery from fresh coronavirus waves and stalling fiscal relief in the US. One of the brighter spots is China, where data over the weekend showed profits at industrial companies grew for a fourth consecutive month in August.

“The data augurs well for the China growth story,” said Stephen Innes, global markets strategist at AxiCorp. At the same time, tension between Beijing and Washington continues to simmer. President Donald Trump’s ban on TikTok was temporarily blocked by a federal judge, dealing a blow to the government in its showdown with the popular Chinese-owned app over national security concerns. China’s largest chipmaker, Semiconductor Manufacturing International Corp., sank to a four-month low in Hong Kong after the U.S. imposed export restrictions.

In the US, Democrats and Republicans will have to pick up the pace to complete a stimulus relief package before the November 3rd presidential election. While the sides remain far apart, Nancy Pelosi said there is a chance she and Treasury Secretary Steven Mnuchin can still reach a deal. Meantime, investors were also digesting a New York Times report that President Trump paid just $750 in US income taxes in both 2016 and 2017. Trump said the story is a “total fake.” – Bloomberg