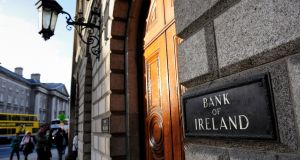 Bank of Ireland was 2.2 per cent lower, while AIB lost 1.4 per cent. Photograph: Frantzesco Kangaris/Bloomberg

A jump in oil and tobacco shares helped European stocks close higher on Tuesday, with the main indexes partially recovering from a sell-off triggered by fears of new lockdowns as Covid-19 cases spiked across the continent.

The Iseq index trailed other European indices, closing up just 0.4 per cent with banks and construction-related stocks dragging down the bourse.

Property stocks were in the doldrums on Tuesday with Glenveagh down 1.7 per cent and Cairn Homes flat.

Some stocks that have been strong performers in recent weeks ran out of steam, with Flutter down 1.8 per cent after a good run and Ryanair losing 1.6 per cent.

Another notable performer of late is Uniphar, which was 3.7 per cent lower.

London’s Ftse 100 broke a four-session losing run on Tuesday after prime minister Boris Johnson introduced restrictions to curb a resurgence in Covid-19 cases in Britain without resorting to another full-blown lockdown.

After losing almost 5 per cent over the past four sessions, the Ftse 100 jumped as much as 1.2 per cent after the announcement, before closing 0.4 per cent higher.

The mid-cap index had reversed early losses to gain up to 0.5 per cent, but was back in the red as insurers slumped. Beazley dropped 14.1 per cent on a likely doubling in claims, while other insurers were hit after the Financial Conduct Authority proposed stopping insurers from charging existing car and home insurance customers more than new ones.

British American Tobacco gained 4.1 per cent and Imperial Brands was up 3.2 per cent after RBC boosted its ratings to “outperform”.

Premier Inn-owner Whitbread slipped 2.8 per cent after saying it planned to cut 6,000 jobs in its hotel and restaurant units due to the pandemic’s impact on the industry.

Meanwhile, home improvements retailer Kingfisher topped the Ftse 100 after it reported a 23 per cent jump in first-half profit.

Airbus fell 2.7 per cent after chief executive Guillaume Faury told a French radio station that the situation with airlines was worse than expected.

Deutsche Bank slipped 1 per cent after an executive said it planned to shutter one in five branches in Germany.

The S&P 500 and the Nasdaq edged higher in early trading on Tuesday, led by a bounce in shares of Amazon, while uncertainty over more US fiscal stimulus kept trading in Dow constituents muted.

Amazon jumped 2.7 per cent after Bernstein upgraded its stock to “outperform”, saying the company would continue to receive a boost from premium subscribers and third-party merchants even beyond the pandemic. Microsoft, Alphabet and Facebook, which together fuelled a Wall Street rally since a coronavirus-driven crash in March, rose 0.7-1.8 per cent.

Tesla fell 6 per cent after chief executive Elon Musk warned about the difficulties of speeding up production as an expert cautioned the carmaker’s increased reliance on large-scale aluminium parts could bring new manufacturing challenges.

Autozone rose 1.3 per cent after the auto parts retailer reported better-than-expected sales and profit for the fourth quarter.

Oracle shed 1.7 per cent on a report that Beijing was unlikely to approve a proposed deal by the software maker and Walmart for ByteDance’s TikTok.

1 How long can Government afford to keep State pension age at 66?
2 Farm lobby seeks EU ban on vegan ‘burger’ and veggie ‘sausage’
3 Liam Neeson among new investors backing €100m Ireland Impact fund
4 Guinness brings out a non-alcoholic version of the black stuff
5 Donohoe said delay to local property tax reform was ‘untenable’ before deferring it
6 Bord Pleanála clears way for 21-storey tower on former Apollo House site
7 How much will a Covid-19 vaccine cost?
8 How on earth do we the calculate the cost of Level 5 for the Irish economy?
9 Weaknesses of food industry
10 ‘No demand... because there are no people’ at well-known Dublin pub
Real news has value SUBSCRIBE