Markets uncertain ahead of first US presidential election debate 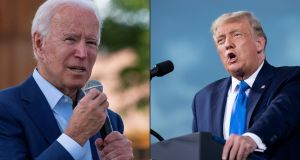 With just over a month before the US presidential election, Donald Trump and Joe Biden are set to take the debate stage Tuesday September 29th. Photograph: JIM WATSON and Brendan Smialowski / AFP via Getty Images

Gold prices edged up on Monday as the dollar slipped off a two-month peak hit last week as political uncertainty accelerated ahead of the first presidential election debate between US President Donald Trump and his Democratic rival Joe Biden.

Spot gold was up 0.1 per cent at $1,861.13 per ounce by 0503 GMT. US gold futures were steady at $1,865.90. “Gold is going to be driven by the tenor of the US dollar,” said Stephen Innes, chief market strategist at AxiCorp. “The big move is going to probably occur after the presidential debate when we have a better read on where the polls are going to be sitting.”

The dollar index was down 0.2 per cent against rivals, slightly off a two-month peak hit last week. A firmer dollar makes bullion more expensive for holders of other currencies. Trump and Biden will have their first presidential election debate on Tuesday.

Investor focus will also be on a new fiscal support package after US House Speaker Nancy Pelosi said on Sunday a deal could be reached with the White House on a coronavirus relief package and that talks were continuing.

“I don’t think they are expecting a big deluge but some sort of middle ground,” Innes added. Global central banks and governments have released massive stimulus to prop up their economies from the impact of the COVID-19 pandemic, pushing gold more than 20 per cent higher this year. However, prices have retreated by about 10 per cent since hitting a record peak in August.

On the technical front, spot gold may break support at $1,855 per ounce, said Reuters technical analyst Wang Tao. Meanwhile, speculators reduced their bullish positions in COMEX gold and silver contracts in the week to September 22nd. Elsewhere, silver was steady at $22.87 per ounce, platinum gained 0.6% to $852.21 and palladium rose 0.1% to $2,218.18. Reuters