FTSE 100 outperforms most indices, as Brexit fears contribute to a mixed day for Iseq 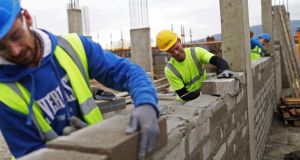 European stocks posted modest gains on a mostly subdued day in which the FTSE 100 outperformed other major indices. Euro-zone government bond yields fell as investors grew warier about how and when the United Kingdom will leave the European Union.

Talk of an early UK general election to break the impasse and of a possible Brexit extension influenced investor sentiment during the session, though sterling later steadied on currency markets.

There was some activity in the real estate investment trust stocks, with Green Reit finishing flat at €1.91 and Hibernia Reit adding 0.1 per cent to finish at €1.38.

Shares in domestically focused UK firms eased on Wednesday as votes in parliament kept investors guessing on the final timing and shape of Britain’s withdrawal from the EU, while the blue-chip FTSE 100 touched a near one-month high.

The FTSE 100 climbed 0.7 per cent, as oil majors tracked gains in crude prices and miners benefited from a rise in nickel and copper prices.

Housebuilders, considered among the most vulnerable, were hit as Barratt, Persimmon and Berkeley shed around 2 per cent each, while Royal Bank of Scotland fell 2.9 per cent.

Precious metals miner Fresnillo gave up 1.7 per cent after it forecast annual silver and gold production at the lower end of an already reduced target range, and reported a fall in quarterly output.

Sports Direct slid 0.25 per cent on a day when the Mike Ashley company announced a new auditor in RSM and the retailer also alleged that Goals Soccer Centres did not properly consider a takeover offer.

The pan-European Stoxx 600 index added just 0.1 per cent. In Germany, the Dax finished 0.3 per cent higher, while the French Cac 40 slipped almost 0.1 per cent.

Heineken shares lost 3.1 per cent after the world’s second largest brewer said operating profit this year would be at the lower end of its previous forecast.

Auto stocks were boosted by an earnings update from PSA Group, with the Peugeot-maker rising more than 3 per cent after sales of its SUVs boosted quarterly revenue.

Chipmakers Infineon, Dialog and STMicroelectronics had a weak day after US company Texas Instruments forecast a double-digit drop in current-quarter revenue.

Wall Street fortunes were mixed in early trading as investors sifted through a batch of earnings reports. Boeing led gains in the Dow Jones after mapping out a sharp boost to output of the 737 Max, while Apple climbed after analysts at Morgan Stanley raised its target for the shares.

Caterpillar trimmed losses as its $1 billion buyback programme offset a profit-forecast cut. Social-media platform Snap slumped as its earnings failed to warrant additional optimism after a strong rally in the shares.

Eli Lilly slid as sales for a pair of key drugs drew criticism from Wall Street, while Hilton Worldwide Holdings climbed after boosting its forecast for the rest of the year.

Beyond Meat shares briefly fell below $100 for the first time since June. The stock, which publishes earnings next week, has gained about 300 per cent since its initial public offer. – Additional reporting: Reuters / Bloomberg.