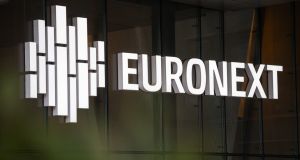 The pan-European Stoxx 600 index ended flat after rising as much as 0.8 per cent earlier in the session as positive sentiment ebbed away in the afternoon.

European stocks lost steam heading into the close on Thursday, weighed down by oil and real estate shares, while the European Central Bank (ECB) stuck to its monetary policy but warned that a rise in Covid-19 infections posed a risk to the euro zone’s recovery.

The ECB offered few surprises after it kept its policy unchanged, while president Christine Lagarde said it was prepared to provide even more economic support if needed.

The Iseq closed up about 0.3 per cent, bucking the negative trend. This was despite a 0.5 per cent decline for cement-maker CRH, which has been the beneficiary of a “Biden bounce” since November, but slipped to €36.73 in the more subdued session.

Property stocks were also off the boil, with Glenveagh Properties falling almost 1.9 per cent to 85 cent and Cairn Homes losing 2.5 per cent to finish at €1.02 after its plan to build more than 600 homes on land formerly owned by RTÉ in Dublin suffered a delay.

It was a lacklustre session for the FTSE 100, with the blue-chip index ending almost 0.4 per cent lower, while the mid-caps on the FTSE 250 finished down 0.4 per cent as the buoyant inauguration mood faded.

Aer Lingus owner International Consolidated Airlines Group declined 3 per cent, while the Daily Mail and General Trust (DMGT) edged down 1.1 per cent after reporting a fall in revenues from newspaper sales.

There was better news for Pets at Home, which added 2.2 per cent after updating investors. The retailer has seen sales rise after the pandemic led to a pet ownership boom.

The pan-European Stoxx 600 index ended flat after rising as much as 0.8 per cent earlier in the session as positive sentiment ebbed away in the afternoon.

Euro zone stocks came off session highs to close 0.1 per cent lower with the euro strengthening against the dollar, while euro zone banks slid 0.6 per cent.

European shares had earlier rallied to near 11-month highs as investors bet on major stimulus from US president Joe Biden, who signed half a dozen executive orders including a US return to the international Paris Agreement to fight climate change.

In Germany, the Dax nudged down 0.1 per cent, while the French Cac 40 finished 0.7 per cent lower. French oil giant Total dropped 2.3 per cent amid the softening of oil prices.