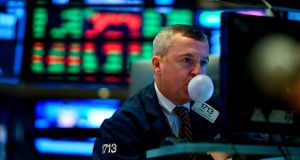 European stocks slipped on Tuesday, dragged down by retailers, travel and banking stocks as the possible extension of Germany’s coronavirus lockdown raised concerns about the damage to earnings and economic growth.

After gaining almost half a percent at the open, the pan-European Stoxx 600 index inched lower as the session wore on and closed down 0.2 per cent.

European bourses started the day in optimistic mood over China’s economic strength after data confirmed the world’s second largest economy was one of the few to grow over 2020.

However, the prospect of longer lockdowns kept investors on edge as German chancellor Angela Merkel and state premiers agreed to extend a lockdown for most shops and schools until February 14th, sources told Reuters.

The Iseq closed roughly unchanged from the previous session as positive metrics in some areas were overshadowed by concerns about the likely length of the lockdown.

Homebuilders Cairn Homes and Glenveagh both rose on the back of positive house price data and a forecast that Irish construction would grow by as much as 15 per cent this year despite the disruption from Covid.

Aryzta, the Swiss-Irish bakery group, continued its climb of recent weeks, rising to 73 cent. This followed an announcement late on Monday that it will scrap its Irish stock market listing.

The company said the decision reflected the relatively low level of trading in Aryzta shares on Euronext Dublin compared with its main Swiss exchange listing in Zurich.

Hotel group Dalata and budget airline Ryanair both rose despite a slide in travel-related stocks in Europe linked to Germany’s extended lockdown. Dalata was up 1.9 per cent at €3.50, while Ryanair was up 1.8 per cent at €15.57.

The State’s two main banks Bank of Ireland and AIB followed their European counterparts into negative territory, declining by 1.8 per cent and 1.4 per cent respectively.

The FTSE 100 index closed down 0.1 per cent , declining for the third consecutive session.

Entain plunged 11.9 per cent to the bottom of the blue-chip index after MGM said it would not submit a revised proposal or make a firm offer for Entain, which had said the approach announced two weeks ago significantly undervalued its business.

Miners dragged even as Rio Tinto – the world’s biggest iron ore producer – reported a 2.4 per cent rise in fourth-quarter iron ore shipments, helped by industrial activity in China. Rio’s shares fell 1.0 per cent, while Anglo American and Glencore dropped more than 1 per cent.

The FTSE 100 tumbled 14.3 per cent in 2020, its worst performance since the 2008 financial crisis and underperforming its European peers by a wide margin, as pandemic-driven lockdowns battered the economy and led to mass layoffs.

In other company news, shopping centre operator Hammerson – it owns a 50 per cent stake in the Dundrum, Ilac and Pavillion shopping centres in Dublin – fell 2.1 per cent after receiving less than half of the rents due for the first quarter as stricter Covid-19 restrictions aggravated conditions in Britain’s high streets and rest of Europe.

Defensive sectors that tend to be less affected by economic cycles such as healthcare and utilities gained, while retail, mining and travel and leisure took the biggest hits.

Among the companies that reported quarterly results, Switzerland’s Logitech fell 6.4 per cent after hitting an all-time high earlier in the wake of raising its 2021 sales growth and profit outlook.

As European earnings gather pace, analysts are predicting a 26.2 per cent decline in fourth-quarter profit for companies listed on the Stoxx 600, as per Refinitiv IBES data.

However, the main worry for investors is that an expected 43.5 per cent and 81.1 per cent rebound in first and second quarter earnings could be called into question as the European economy reels from the impact of stringent Covid-19 lockdowns.

Danone rose 2.7 per cent after an activist investor called on the French food group’s chief executive to step down after it took a stake in the company late last year.

Wall Street’s main indexes rose on Tuesday on positive earnings updates from major US lenders, while treasury secretary nominee Janet Yellen advocated for a hefty fiscal relief package before Senate lawmakers to ride out the world’s largest economy from a pandemic-driven slump.

At her confirmation hearing, Ms Yellen said the benefits of a big package outweigh the costs of a higher debt burden. President-elect Joe Biden, who will be sworn into office on Wednesday, outlined a $1.9 trillion (€1.5 trillion) stimulus package proposal last week to jump-start the economy and accelerate the distribution of vaccines.

Bank of America climbed 1.4 per cent as it also topped fourth-quarter profit estimates and joined JPMorgan, Citigroup and Wells Fargo in releasing some cash reserves to cover for coronavirus-driven loan losses, underscoring its confidence in the economy.

Big US bank Goldman Sachs’s fourth-quarter profit more than doubled, dwarfing estimates after another blowout performance at its trading and underwriting business. Its shares fell 0.7 per cent in choppy trading following a sharp surge over the last two weeks. – Additional reporting by Reuters