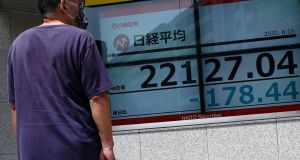 European equities pushed higher on Friday as investors weighed up rising coronavirus cases in the US and China against sprawling stimulus measures from central banks.

The region’s composite Euro Stoxx 600 gained 0.8 per cent in morning trading, helped by the CAC 40 in Paris adding 1 per cent. London’s FTSE 100 rose 1.2 per cent, after news that British retail sales had rebounded stronger than expected in May. S&P 500 futures point to the US benchmark index opening 0.9 per cent higher later in the day.

Global stocks have managed to record solid gains this week, regaining momentum in a powerful rally that began in March when bourses bottomed out as lockdown measures became widespread.

The MSCI World index of developed market equities is on course to gain 2.4 per cent this week.

The gains came despite renewed fears about upticks in Covid-19 infections. The US on Thursday suffered its largest one-day increase in coronavirus cases since early May, raising uncertainty over the prospect of a swift economic recovery.

The jump of 27,000 infections was propelled by a record number of new cases in California, Florida, Arizona and South Carolina.

Chinese officials have also been grappling with a spate of new Covid-19 cases in Beijing. Authorities on Friday reported another 25 cases in the city by the end of Thursday, taking the tally for the latest outbreak in the Chinese capital to 183.

Investors have batted off these developments against a backdrop of liquidity pumped into financial markets by central banks, the potential easing of US-China tensions and the continued reopening of economies.

“It is more likely that despite occasional local outbreaks leading to pauses in reopening in some states and potentially to local shutdowns, the overall trend of easing restrictions will continue,” said analysts at Bank of America, who predict European stocks will rise 15 per cent by November.

However, many investors warn that equities have become overvalued compared with projected corporate earnings and the economic recovery from the pandemic will become increasingly difficult in the months ahead.

“In the next few weeks, the easy part of a post Covid-19 recovery will be over and by then credit and equity will be far more expensive,” said Sebastian Galy, strategist at Nordea Asset Management.

“The question beyond this is whether authorities have managed to stabilise long-term growth expectations which drive many long-term and short-term behaviours.”

Sluggish economic recovery is not the only factor threatening to derail the bull run, analysts say. An increase in bankruptcies, permanent unemployment and renewed geopolitical tensions in Asia-Pacific could reverse the momentum in markets.

Despite the fresh cluster of Covid-19 cases in Beijing, China’s CSI 300 index of Shanghai and Shenzhen-listed stocks rose 1.3 per cent on Friday following a meeting between US and Chinese officials in Hawaii.

Traders said the meeting suggested the preliminary trade deal between the two countries was safe for the time being, despite a recent flare-up in tensions between Washington and Beijing.

“It shows both sides are willing to step back from the brink, which is positive for markets,” said Andy Maynard, a trader at China Renaissance. But he added there was “no new catalyst in the market” capable of pushing equity prices higher.

Oil prices were supported by a report citing two of the largest commodity traders saying that crude demand is recovering rapidly this month and pledges by two producers to compensate for overproduction in May to comply with quotas set by Opec and its allies.

Brent crude, the international benchmark, rose 2.6 per cent to $42.58 a barrel, while West Texas Intermediate, the US marker, climbed 3 per cent to $40 a barrel. – Copyright The Financial Times Limited 2020

A tale of two pandemics for Smurfit Kappa and Greencore 11:52
Same Brexit stumbling blocks persist as Barnier travels to London 10:48
Spain’s BBVA and Sabadell scrap merger talks 10:33
Over 100 Kepak workers test positive for Covid-19 in Cornwall 10:17
Oxford-AstraZeneca vaccine may be trialled again to prove results were ‘not a mistake’ 09:54