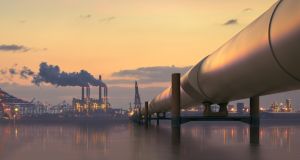 Oil snapped a two-day gain as a second wave of coronavirus cases in China and a report pointing to a further swelling in US stockpiles cast doubt on the demand outlook in the world’s two largest economies.

Futures in New York fell toward $37 a barrel after climbing almost 6 per cent over the previous two sessions. Beijing has ordered all schools to close in an escalation of containment measures as its struggles to halt the outbreak that’s already spread to neighbouring provinces. China is one of the world’s few energy consumption bright spots, staging a rapid recovery over the past few months.

The American Petroleum Institute reported US oil stockpiles rose by 3.86 million barrels last week, according to people familiar with the data. Inventories grew to a record in the previous week, official figures showed, despite output having fallen by at least 2 million barrels a day since March.

While top global producers have curbed output in response to the pandemic, demand is returning only slowly and second-wave risks remain, making it tougher for crude prices to keep rallying. Global oil demand will rebound in 2021 but will take a couple of years to get back to pre-virus levels, the International Energy Agency said in its monthly report.

“A large part of the broader rally has been on the back of a strong recovery from China, and if we start seeing parts of the country locking down, that will not be great for demand,” said Warren Patterson, head of commodities strategy at ING Bank. The inventories data in the US also suggests it’s taking longer than expected for consumption to come back, he said.

West Texas Intermediate crude for July delivery fell 2.6 per cent to $37.40 a barrel on the New York Mercantile Exchange after rising on Tuesday. The US benchmark crude has climbed around 5 per cent in June following an 88 per cent surge in May.

Fuel use around the world will remain 2.5 per cent lower next year than in 2019, largely because of the “the dire situation of the aviation sector,” the Paris-based IEA said in its first detailed assessment of 2021 released on Tuesday.

Meanwhile, three OPEC members who were singled out by their peers for failing to bring production down to target levels in May appear to be improving their compliance. Nigerian and Angolan crude exports have fallen markedly in the first half of this month, while shipments from Iraq are showing a small decline. – Bloomberg

1 Covid-19 has distracted us from the looming threat of Brexit
2 Two men face fraud charges over £1.2bn sale of Nama’s NI loans
3 Wifi problems? Quick tips to get your home internet out of the slow lane
4 AIB defends ‘incredibly’ high €1.2bn loans charge as 2008 haunts
5 Project Eagle: What was it and why is it in the news?
6 TikTok to invest $500m in data centre and create ‘hundreds of jobs’
7 Lucy Kellaway: Poolside working no longer a sign of importance
8 How safe is it to go back to the office?
9 Italy threatens Ryanair flight ban for alleged Covid-19 violations
10 Sacrificing pubs for schools: Ireland’s latest Covid trade-off
Real news has value SUBSCRIBE