European stocks gain as technology shares buoyed by US chipmakers 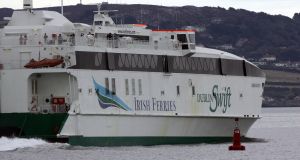 Irish shares were underpinned by reports that the UK government has stood down on emergency preparations for a no-deal Brexit.

The pan-European Stoxx index added 0.2 per cent, after falling over the two previous sessions following the killing of top Iranian general Qassem Suleimani on Friday.

The Iseq index moved 0.5 per cent higher to 7,246.53, with Brexit-sensitive Irish stocks buttressed as Sky News reported that the UK’s emergency preparations for a no-deal Brexit have been halted “with immediate effect”. British prime minister Boris Johnson’s deal to leave the EU is expected to be approved by lawmakers later this week.

Bucking the trend, food companies Glanbia and Kerry Group were out of sorts, falling 3.7 per cent and almost 1 per cent, respectively.

The FTSE 100 ended flat on the day with index heavyweights Shell and BP losing roughly 1 per cent each due to lower oil prices, while the midcaps outperformed with a 0.3 per cent gain on hopes over a Brexit deal.

Retailers were the standout performers among bluechips, as sales by Morrisons helped strike out some worries of dismal trading updates for the key holiday period.

Ocado, Morrisons, Kingfisher, Primark owner Associated British Foods and Sainsbury’s took the top spots on the main index with gains between 1.6 per cent and 4.2 per cent.

Among midcaps, Premier Oil shares surged 14 per cent after a deal to buy certain BP assets, more than offsetting a 17 per cent slide in luxury carmarker Aston Martin following a profit warning.

Aston Martin has seen its shares plummet about three quarters in value since a 2018 listing.

A rally in chip stocks helped German and Italian shares strengthen while gains in other European bourses were curbed by nervousness amid tension between the US and Iran.

Semiconductor stocks tracked their US peers higher as Microchip raised its third-quarter sales outlook. A more than 4 per cent gain for Infineon Technologies helped Germany’s DAX rise 0.8 per cent while STMicroelectronics’s 2.5 per cent gain lifted Italian stocks by 0.6 per cent.

Auto stocks also shone after British carmaker Rolls-Royce marked a 25 per cent jump in 2019 sales, giving some comfort to a sector that has been plagued by slowing global demand. Shares of Rolls-Royce owner BMW rose 1.6 per cent.

But without a solid majority in parliament, the coalition may struggle to pass legislation and will need to negotiate with other parties on a case by case basis.

The S&P 500 and the Dow Jones Industrial Average slipped in early afternoon trading, led by losses in oil and healthcare stocks, with investors nervously awaiting the latest in the US-Iran standoff.

The tech-heavy Nasdaq remained buoyant as chipmakers resumed their strong rally from 2019.

Healthcare stocks fell as shares in Merck & Co were hit by mixed results in its late-stage trial of a cancer drug.

Shares in oil explorer Apache soared 25 per cent after it and France’s Total said they made a major oil discovery off the coast of Suriname in South America. – Additional reporting Reuters