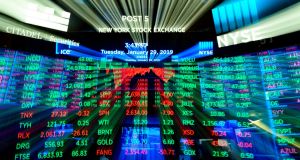 Global equity markets scaled fresh records in a year-end rally on Friday as upbeat Chinese economic data and optimism that a US-China trade deal is imminent bolstered global growth prospects. However, the US dollar weakened as risk appetite increased.

The Iseq was open for business on Friday, but trading volumes were still wafer thin due to the holiday season.

The two largest gainers were resource firms Ormonde Mining, up more than 20 per cent to about 3 cents per share, and Mincon Group, which was up 11 per cent to €1.14 per share. Both companies are sensitive to positive economic data from mineral-hungry China, although both jumped on tiny trades.

Origin Enterprises fared well, finishing the session up 4.75 per cent to €3.87, helping to regain some of the ground it lost last week due to a profit warning.

Just four Irish-listed stocks – Mainstay Medical, Yewgrove, Uniphar and Kingspan – finished in the red, and all did so on very small trading volumes.

London’s main index rose for the 11th straight session on Friday, as trade-sensitive stocks cheered further positive signals from the US and China over signing a phase-one deal.

The FTSE 100, which is on its best run in three years, gained 0.2 per cent, supported by a near 2 per cent rise in Glencore. BP was also a major boost to the index and rose 1 per cent, benefiting from higher crude prices.

Food delivery company Just Eat topped the main board with a 2.4 per cent rise after Britain’s competition regulator said it would launch an in-depth investigation into Amazon’s deal with online food-delivery group Deliveroo.

NMC Health fell 2.6 per cent. The healthcare provider’s shares more than halved in value last week after short-seller Muddy Waters criticised its financials, but shot up more than 36 per cent on Monday after promising to review its books.

European shares rose to a third day of record peaks this week as various equity markets remained on course for their best year since at least the global financial crisis a decade ago.

MSCI’s gauge of stock performance in 49 countries gained 0.35 per cent, while the pan-European Stoxx 600 index rose 0.17 per cent, both setting all-time highs.

The Euro Stoxx 50 index rose 0.5 per cent on Friday, helped by solid gains from the French and German stock markets.

The euro zone’s leading blue-chip index extended its gains for the quarter to over 6 per cent and lifting its rally in 2019 to 26.4 per cent – which would be its biggest annual gain in a decade, and the second-biggest since the introduction of the euro in 1999.

Friday’s moves higher were primarily driven by growth-sensitive sectors such as industrials, materials and consumer goods, underscoring investors’ sense that some of the gloom earlier this year was overdone.

US Treasury yields fell as the government debt found support following a sell-off that sent yields to one-month highs.

The benchmark S&P 500 index was about half a percentage point shy of logging its best year since 1997. The Nasdaq crossed the 9,000 point mark for the first time on Thursday. While Wall Street’s main indexes pulled back briefly from their record opening levels on Friday, they were back at all-time highs.

Shares in Amazon rose 1.4 per cent, after rising about 4 per cent on Thursday following a report which showed that US shoppers spent more online during the holiday shopping season than in 2018.

Netflix and Alphabet were among the biggest drags on the S&P 500 and Nasdaq. The so-called FAANG group of stocks have logged a good run over the past decade, with shares of Netflix up 4,100 per cent in the same period. – Additional reporting: Reuters

1 Ikea among major retailers to reopen next week
2 Passengers face queuing in car parks at Dublin Airport
3 Major credit union plans to limit savings accounts to €40,000
4 Woodchester founder Craig McKinney dies
5 Student accommodation sector set for harsh Covid-19 lesson
6 Penneys will not reopen on Monday despite expected changes to lockdown rules
7 Revenue tells court it was entitled to raise €1.64bn tax assessment against Perrigo
8 Angela Merkel sweeps in to save the euro zone
9 Land dispute between Citywest Hotel owner and neighbours before court
10 Wild Geese: ‘I love to introduce and inspire people of all ages to the mountains and cliffs’
Real news has value SUBSCRIBE