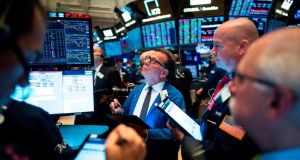 European shares retreated on Monday, as investors cashed in gains from a record run in stocks that has put the benchmark index on course for its best year since the global financial crisis. The pan-European Stoxx 600 index began a holiday-shortened week with a 0.4 per cent fall, with France’s EssilorLuxottica among the biggest drags on the index.

The spectacles company shed 2.2 per cent, eyeing its worst day in four weeks, after saying it had discovered fraudulent activity at a plant in Thailand that was expected to cost the company €190 million.The lull was also reflected in major country indexes, with Frankfurt shares declining more than half a percent in the absence of any major updates on a US-China trade truce.

Spanish stocks dropped 0.5 per cent, while London-listed shares dipped 0.3 per cent. “Volumes are about 50 per cent below average and people are doing as little as possible: a little bit of profit taking and a little bit of window dressing as it’s the year end,” said Mark Taylor, a sales trader at Mirabaud. After somewhat choppy trading earlier in the year, European equities have enjoyed a strong December as investors received clarity on two of the major risks to global economic growth: the US-China trade war and Brexit.

Fairly upbeat economic data from around the world has also eased recession fears, with latest figures showing Spain’s economy growing 0.4 per cent in the third quarter, in line with a flash estimate. But with just two days left until the end of the decade, few major updates are expected on the initial Sino-U.S. trade agreement, giving stock prices little motivation to move much from current levels.

Among individual stocks, Italian state-owned lender Monte dei Paschi di Siena gained 0.9 per cent as it completed three disposals of impaired loans for around €1.8 billion, surpassing a goal set in its restructuring plan two years ahead of time. Norway-based Elkem, a supplier of silicone and silicon materials, rose 2 per cent after agreeing to acquire Polysil, a Chinese maker of silicone elastomer and resins. - Reuters