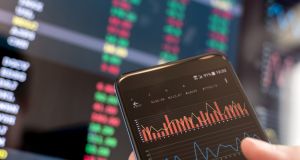 The Dublin market was marginally higher at 6,532.

Asian stocks and US futures also recovered from sharp losses that were sparked by US President Donald Trump abruptly calling off talks with Democratic lawmakers on the coronavirus relief legislation until after the election.

Later on, Mr Trump urged Congress to provide $1,200 stimulus checks for Americans and other support for airlines and small businesses.

“You can look at this as partly a negotiating tactic,” said Craig Erlam, senior market analyst at Oanda in London. “You call off talks now in the hopes that the Democrats will cede a little bit a ground. But I’m sceptical we’ll get one before the election.”

The pan-European Stoxx 600 index was trading flat, with banks, insurers and energy companies retreating after a rally in the previous session.

The benchmark hit a two-week high earlier this week on reports of progress in Trump’s health after he tested positive for Covid-19, although trading has been choppy amid uncertainties about the November election.

Britain’s biggest supermarket chain Tesco gained 2.2 per cent as it reported a jump in sales and forecast full-year retail operating profit to be at least the same level as 2019-20.

Dialog Semiconductor rose 2.4 per cent after it forecast better-than-expected revenue in its third quarter.

Beverages companies AB InBev, Heineken, and Pernod Ricard rose between 2.5 per cent and 3 per cent after Jefferies upgraded the stocks to “buy”, while double upgrading Diageo.

Swedish audiobook streaming group Storytel was up 4.3 per cent after it beat its third-quarter forecast for subscriber growth and streaming revenue.

Nexi slid 5.1 per cent after top shareholder Mercury UK Holdco said it was selling 13.4 per cent of its stake in the Italian payments group, a day after Nexi announced a merger with rival SIA.