Hopes for a Brexit deal boost travel and banking stocks 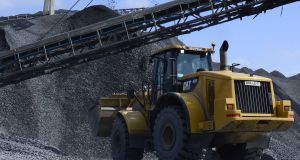 Building materials group and index heavyweight, CRH, added 2.31 per cent to €32.27, a move traders attributed to hopes of a US stimulus programme. Photograph: Cyril Byrne

Gains for travel and banking stocks on the back of hopes for a Brexit deal and US stimulus package boosted European markets on Tuesday.

Strong showings from leading stocks helped the Irish market outperform most in Europe on Tuesday.

A growing likelihood that the EU will adopt an air travel system, geared at ending the patchwork of quarantine rules operated by member states, lured investors to airline and tourism-related stocks.

Dealers said the upbeat view of travel stocks fed through to Irish hotel group, Dalata, whose shares added 2.08 per cent to €2.45.

Ferry operator and shipping company, Irish Continental Group, ended the day 2.24 per cent up at €3.19.

Building materials group and index heavyweight, CRH, added 2.31 per cent to €32.27, a move traders attributed to hopes of a US stimulus programme.

The banks also did well, cashing in on positive sentiment towards lenders generally. Bank of Ireland rose 8.21 per cent to €1.753 while AIG added 6.1 per cent to 94.8 cent.

House builder Barratt added 2.74 per cent to close at 525.4p while rival Persimmon gained 2.62 to 2,665p as the UK’s construction purchasing managers’ index came in ahead of market analysts’ predictions.

The news had less impact on Irish builders’ supplier, Grafton Group, owner of the Woodie’s DIY chain in the Republic, which inched 0.89 per cent up to 681.5p. Grafton has a large British business and is listed solely in London.

Another Irish business, sandwich maker and convenience food group, Greencore, climbed 8.4 per cent to 103p. Dealers said that the stock was regaining ground after being heavily sold on Monday.

Elsewhere, security giant G4S nudged 0.45 per cent higher to 201.9p after it was awarded a £300 million (€329 million) British government contract to run a new mega-prison for 10 years.

Wagamama owner the Restaurant Group closed higher after telling investors trading has been “very encouraging” since sites reopened. Shares in the hospitality company moved 4.3 per cent higher to 57p at the close of play.

Puma slid 1.1 per cent after French luxury group Kering said it had sold a 5.9 per cent stake of the German sportswear group.

French waste and water firm Suez jumped 4.6 per cent after rival Veolia succeeded in buying a large stake in the company from power group Engie.

The German Dax increased by 0.61 per cent while the French Cac moved 0.8 per cent higher. Banks and auto makers performed will while dealers said the travel and leisure index rose 3 per cent.

Wall Street technology majors also came under pressure after news that the US House of Representatives’ anti-trust report on big tech companies contained a “thinly veiled call to break up” the companies.

Amazon. com, Apple, Facebook and Google-owner Alphabet fell between 0.8 per cent and 1.6 per cent following the news, pulling the S&P 500 growth index down 0.4 per cent.

Boeing fell 3 per cent after the planemaker cut its rolling 20-year forecast for aircraft demand due to the fallout from the Covid-19 pandemic.

US-listed shares of Biontech jumped 8 per cent after the European health regulator said it had started a real-time review of the Covid-19 vaccine that the German company is developing with US drugmaker Pfizer, whose shares dipped 0.1 per cent.