European markets upbeat on prospect of US stimulus deal 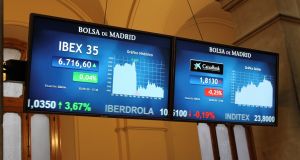 Following a positive close on Wall Street, the European Stoxx 600 opened 0.6 per cent higher, led by technology and retail stocks.

European stock markets rose and the dollar weakened as investors responded to fresh hopes that Democrats and Republicans could come together to forge a stimulus deal to support the world’s largest economy.

Democrats in the House of Representatives on Wednesday evening delayed a vote on their own $2.2 trillion (€1.68 trillion) stimulus package to give more time for negotiations with the Trump administration, keeping alive hopes for a last-ditch deal.

This came after Treasury secretary Steven Mnuchin told CNBC on Wednesday that a deal was possible after Republicans had increased the size of their proposed stimulus to $1.5 trillion.

The fresh hopes of a deal gave investors the confidence to sell off some dollar holdings. The US currency in September put in its best performance in 14 months, benefiting from its status as a haven from economic uncertainty. In Asian and early London trading on Thursday the dollar index, which tracks it against a basket of trading partners’ currencies, fell 0.2 per cent to a five-day low of 93.7 points.

“Positive risk sentiment” has returned, economists at Daiwa said in a research note. That “appeared to owe to investors’ optimism that ongoing talks would lead to a resolution of the current impasse regarding additional fiscal stimulus”, they said.

The confidence prompted some buying of emerging market currencies and stemmed a decline in international oil prices. The dollar lost 0.4 per cent against the rouble, with one unit of the US currency buying Rbs77.24. The Turkish lira rose 0.7 per cent, with one dollar buying TL7.6596.

Brent crude prices, which lost almost 10 per cent last month because of fears about the global economic recovery from coronavirus, were steady on Thursday in London at $42.36 a barrel.

The positive mood in Europe was boosted by better than expected third-quarter profits from H&M, the world’s second-largest retailer. Shares in the clothing and homewares group rose almost 7 per cent in early trades, with its results also lifting shares in its rivals. Zara owner Inditex gained 1.5 per cent and the UK’s Next rose 1.2 per cent.

In London, the exporter heavy FTSE 100 fell 0.5 per cent, reacting to a weaker dollar that suppresses the domestic value of companies’ overseas earnings. Sterling has gained almost 1.5 per cent against the dollar in the past five trading sessions, hitting $1.2937 on Thursday morning despite nervousness about whether UK and EU negotiators will hammer out a deal for an orderly Brexit.

Paul Donovan, chief economist at UBS wealth management, warned investors not to get complacent about the certainty of a stimulus deal in the US. “The polarised nature of politics in the US does raise questions about how easy it will be,” he said, adding that any significant fiscal support was unlikely until January, following the November presidential election.

Economists at MUFG cautioned that, while a stimulus package would help the US economy it was set to remain weak for the rest of the year. Growth in third-quarter gross domestic product could have been about 35 per cent, they said, in a strong rebound caused by lifting coronavirus shutdowns. But growth in the fourth quarter could drop to about 1 per cent, they said.

“The US economy opened too fast and prematurely and hence the economy from here will only grind out further growth,” MUFG wrote. “Hardly a ringing endorsement.” – Copyright The Financial Times Limited 2020