European stocks end week with gains for tech and telecoms 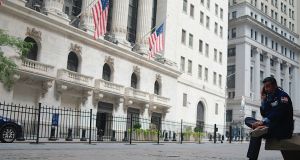 AIB continued its bad run, down another 2.9 per cent to €1.02 after announcing first-half figures on Thursday. Bank of Ireland was unchanged at €1.86.

Paddy Power parent Flutter continued to bounce back, rising 0.4 per cent on Friday.

Food stocks, which were weak earlier in the week also recovered with Glanbia up 2.5 per cent and Kerry 1.5 per cent higher. UK-listed but Dublin-headquartered Greencore was up 4.8 per cent.

Hotels group Dalata was one of the biggest fallers, losing 3.5 per cent. Other movers included Iseq heavyweight CRH, up 1 per cent, and Smurfit Kappa, which was 1.3 per cent higher.

London’s FTSE 100 closed flat on Friday as a commodity-linked slump offset gains spurred by some upbeat earnings and AstraZeneca, while an index of more domestically focused stocks rose as hopes grew of a trade deal with the European Union.

The blue-chip FTSE 100 was unchanged on the day but ended the week up 2.3 per cent, buoyed by largely upbeat quarterly earnings and improving local economic data.

AstraZeneca rose 0.6 per cent. Japan said it will order 120 million doses of the experimental vaccine developed by the drugmaker.

TP ICAP, the world’s largest inter-dealer broker, fell 7.7 per cent as it signalled a tepid start to the second half of the year.

The pan-European Stoxx 600 index, up 0.3 per cent, closed out with weekly gains of 2 per cent. German stocks rose 0.7 per cent while France’s CAC 40 was flat.

Amsterdam-listed Prosus, with its biggest investment in Tencent’s WeChat, fell 4 per cent after US president Donald Trump moved to ban US transactions with the owners of the messaging app and video-sharing platform TikTok.

Deutsche Telekom, which owns 43 per cent of T-Mobile, rose 2.7 per cent after the US firm added more monthly subscribers than expected in the second quarter and said it surpassed rival AT&T.

The S&P 500 retreated from a near six-month high in choppy trading on Friday with data showing a sharp slowdown in US employment growth, while US-China tensions escalated with Mr Trump’s move to ban WeChat and TikTok. With the benchmark index now about 1 per cent below its record high, gains were led by utilities, communication services and real-estate stocks.

New York-listed Tencent Music Entertainment Group, which was spun off from WeChat-owner Tencent Holdings in 2018, fell 3.3 per cent, while Facebook jumped 3.8 per cent.

Microsoft, which is seeking to buy TikTok’s US operations, was down 0.9 per cent. US-listed Chinese stocks such as Baidu, Alibaba and JD.com fell between 1.9 per cent and 4.1 per cent.

T-Mobile US jumped 8.1 per cent as it added more-than-expected monthly phone subscribers and said it had overtaken rival AT&T as the second-largest US wireless provider. AT&T dipped 0.6 per cent.

Biogen’s shares were up 9 per cent at $302.75 after the US food and drug administration said it will conduct an expedited review of an experimental Alzheimer’s drug from the company and Japan’s Eisai.

If approved, aducanumab would be the first treatment designed to delay progression of Alzheimer’s disease. – Additional reporting: Reuters