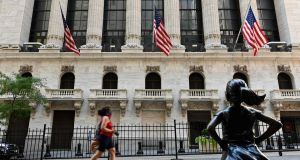 Positive earnings reports and a surge in commodities shares lifted European stock markets on Wednesday, but losses in defensive sectors and worries about surging coronavirus cases globally tempered the mood.

The Iseq index outperformed many of its European peers on Wednesday, closing up 1.3 per cent.

Banks led the way, with Bank of Ireland closing up 7.8 per cent, having gained as much as 10 per cent earlier after it announced first-half results that included a €937 million charge. The bank also said it planned to cut more than 1,400 jobs to cut costs.

AIB also jumped on the positive sentiment towards its rival, closing 4.5 per cent higher.

There was positive sentiment shown towards airlines, with Aer Lingus owner IAG up 10 per cent in London. Ryanair gained 3.5 per cent.

Construction stocks were also higher, with CRH rivals Buzzi and Heidelberg all rising. CRH closed up 2 per cent, with insulation maker Kingspan up 1 per cent.

Surging prices for gold and other metals and a $2.2 billion buyout offer for Hastings Group saw London’s mid-cap index post its best session in seven weeks on Wednesday, with some upbeat earnings and economic data also aiding sentiment.

A 17.7 per cent surge for motor insurer Hastings drove the Ftse 250 up 1.9 per cent, after the group agreed to be bought by Finland’s Sampo and South Africa’s Rand Merchant Investment (RMI).

Among earnings-driven moves, soft drinks bottler Coca-Cola HBC rose 8.1 per cent as its business recovered from April lows, while William Hill gained 8.9 per cent on a first-half profit beat.

German logistics group Deutsche Post gained 2.5 per cent after reporting a better-than-forecast rise in operating profit, benefiting from a jump in ecommerce during the pandemic.

Chipmaker Dialog Semiconductor rose 9.1 per cent after posting second-quarter revenue above its previous estimate, while residential real estate company Vonovia was up 3 per cent, having confirmed its guidance for the year. Travel and leisure stocks extended gains for a third straight session, with Aer Lingus-owner IAG, Lufthansa and Easyjet up 6.5-10.5 per cent.

Walt Disney’s shares jumped 10.5 per cent in early trading, providing the biggest boost the S&P 500 and the Dow as revenue declines for its parks and media networks were not as bad as feared. Drugstore operator and health insurer CVS Health topped estimates for quarterly profit and raised its full-year forecast, while Humana and drugmaker Regeneron Pharmaceuticals also posted forecast-beating earnings.

Johnson & Johnson rose about 1 per cent after it said the US government would pay more than $1 billion for 100 million doses of its investigational coronavirus vaccine. Electric trucks maker Nikola slumped 11.1 per cent after it reported a wider quarterly loss in its first results as a listed entity. – Additional reporting: Reuters