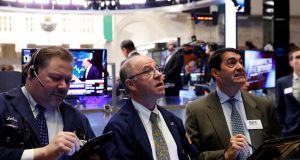 Wall Street traders: US stocks were up slightly on Thursday as a rise in consumer shares helped offset losses in financials

European stocks were left flat-footed as disappointing company results, including a $7.5 billion fine for wrongdoing for Deutsche Bank, sent its shares down more than 5 per cent. Pan-European stock indexes edged lower while London’s FTSE 100 rose half a per cent.

The dollar, meanwhile, fell on Thursday to its lowest since mid-November and world equity markets were little changed after the US Federal Reserve gave no hint on its next interest rate hike and aggressive language from the Trump administration kept investors focused on geopolitical risk.

The Iseq closed marginally up at 6,470, roughly in line with its European peers. Bank of Ireland followed other financials into negative territory, closing down 2 per cent at 24.8 cents.

Packaging group Smurfit Kappa was perhaps the best performer, adding 3.4 per cent, to close at €25.12.

Paddypower Betfair continues to recover after a bearish run, ending the day up 1.2 per cent at €99.23.

After a torrid two weeks, Swiss-Irish food group Aryzta traded flat at €25, having been up 2 per cent earlier on the back strong trading volumes.

Ahead of results on Monday, Ryanair was down marginally at €14.66 in line with other stocks in the sector.

Oil explorer Providence continues to trade strongly, ending the day up 1.6 per cent at 19.9 cents.

The gains in the blue-chip index were led by consumer health and hygiene products firm Reckitt Benckiser Group and catering giant Compass Group. Reckitt confirmed it is in talks to buy US baby formula maker Mead Johnson Nutrition for £13.2 billion, while Compass expressed confidence on its outlook.

It was a busy day for UK company news, with trading updates driving many other movers, including oil major Royal Dutch Shell, gaming firm GVC Holdings and Aberdeen Asset Management.

Deutsche Bank fell 5.2 percent after posting a net loss of €1.9 billion in the fourth quarter as legal costs for past misdeeds outstripped gains from a rebound in bond trading. “The bank is still undergoing a significant restructuring process and ... the numbers don’t really shed any further light on whether the bank will need to raise extra capital, in order to meet future international bank liquidity rules,” said Michael Hewson, chief market analyst at CMC Markets.

Drugmaker Novo Nordisk dropped 7 per cent after the world’s top maker of diabetes drugs said fourth-quarter operating profit came in below forecasts, while Kesko fell 5.9 percent after reporting net sales of €2.77 billion, against a Reuters poll of €2.95 billion.

However, the overall earnings picture stayed positive. Thomson Reuters data shows one-fifth of the firms in the STOXX 600 have announced fourth-quarter results so far, of which 57 per cent have beaten forecasts and 4 per cent have met. Their earnings in the quarter are seen up around 10 per cent from the same period of 2015.

US stocks reversed course and were up slightly on Thursday, as a rise in consumer shares helped offset losses in financials, but investors remained cautious over president Donald Trump’s isolationist policies.

In terms of stocks, Philip Morris rose 3 per cent following the cigarette maker’s results. The stock gave the biggest boost to consumer staples, followed by Mead Johnson that jumped 22.4 per cent after Reckitt Benckiser said it was in advanced talks to buy the company. Financials, which would benefit in a higher-rate environment, were down 0.14 per cent. Ralph Lauren dropped nearly 10 per cent. The company said chief executive Stefan Larsson would leave following differences with the company’s founder and chairman. Results from a clutch of companies, including Amazon. com, Visa and Amgen will keep investors busy on Thursday.