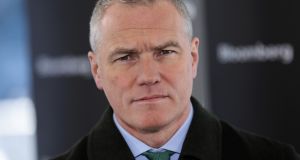 German police and prosecutors investigating possible insider trading by the head of Deutsche Boerse have searched the office and apartment of the man who is leading a planned merger with the London Stock Exchange.

State prosecutors in Frankfurt said the investigation centred on whether secret merger talks with the London Stock Exchange were under way when Deutsche Boerse chief executive Carsten Kengeter bought shares in his company in December 2015.

The allegations coincide with growing resistance in Germany towards plans to put the merged group’s main headquarters in London, opposition that has gained pace as Britain prepares to leave the European Union.

London is set to become the home of the main holding company of the merged exchanges and the joint board, led by Mr Kengeter, would also be based there.

Mr Kengeter bought shares worth €4.5 million in his company on December 14th, 2015, using an option he was given as part of his contract, just over two months before the merger talks were publicly announced.

Prosecutors said they suspected that Mr Kengeter knew of the possibility of a merger when he bought the shares and that this, if proven, would be insider trading under German law.

“The initial suspicion results from talks held by the management of Deutsche Boerse and the London Stock Exchange between July/August and December 2015 that centred on a possible merger of the two companies and the question of where the holding company could be based,” prosecutors said.

There was no immediate comment from Mr Kengeter and a spokesman for Deutsche Boerse declined to comment.

Deutsche Boerse chairman Joachim Faber backed Mr Kengeter, saying the prosecutor’s suspicion was “groundless”. He said that it was only in the second half of January that both chairmen and chief executives of the companies had agreed to begin talks about a merger. That would have been about four weeks after the purchase in mid December.

The London Stock Exchange said it welcomed the chairman’s support for Mr Kengeter and that it looked forward to completing the planned merger between the two exchange operators.

The investigation adds to uncertainty that had already been hanging over the €25 billion merger. Mr Kengeter has spoken of building bridges to London but his lobbying for having the British city as the main headquarters has angered some in the regional German government in Hesse.

Volker Bouffier, an ally of German chancellor Angela Merkel and one of Germany’s most influential politicians, has signalled in the past that he wants Frankfurt, not London, to be the main headquarters for the merged company.

But managers are reluctant to compromise.

Earlier this week, when asked whether he could see the group’s headquarters moved to Frankfurt, London Stock Exchange chief executive Xavier Rolet told Reuters: “The deal is set.”

German authorities, however, have the power to block it.

Prosecutors said they had searched offices at Deutsche Boerse’s headquarters in Eschborn near Frankfurt as well as Mr Kengeter’s Frankfurt home on Wednesday.

It said it aimed to clear up the course of talks between Deutsche Boerse and LSE up to February 23rd, 2016, when the two companies confirmed they were in negotiations for a merger.