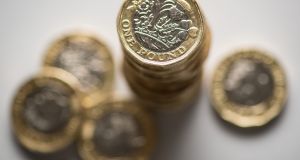 Sterling is now on course for its biggest daily fall versus the dollar in 2018.

The British pound tumbled 1.5 per cent on Friday and headed for its biggest daily drop this year against the dollar after prime minister Theresa May said Brexit talks with the European Union had reached an impasse and new plans were needed.

She said EU leaders needed to come up with new alternatives to her Brexit proposals if both sides were to break the deadlock in their negotiations.

Coming at the end of a week when the pound rallied to a two-month high on hopes of an imminent Brexit deal, Friday’s selloff was a brutal reminder for investors of the currency’s vulnerability to Brexit headlines.

The deterioration in negotiations - accelerated by warnings from EU leaders on Thursday that May must give ground on trade and the Irish border issue by November to clinch an agreement - means the pound has wiped out its entire gains of the week.

Sterling is now on course for its biggest daily fall versus the dollar in 2018.

“Either there is compromise or a no-deal but the risks of no-deal have risen,” said Sarah Hewin, chief economist, Europe, at Standard Chartered.

“The market is still taking a view that the most likely outcome is a deal. At the moment [sterling] seems to be moving one day at a time, one hour at a time and one headline at a time but the fundamental issue is still the same.”

One month implied volatility - a measure of expected price swings - jumped to its highest since February, in its biggest daily rise since January.

Against the euro, sterling slid 1.2 per cent to 89.86 pence while yields on 10-year British government bonds slipped to 1.55 per cent, down 3.4 basis points on the day.

May is racing to get the EU to sign up to her plans for life after Brexit in March next year.

The two sides remain divided over how to ensure the border between Northern Ireland, part of the UK, and EU member Ireland remains free of frontier controls after Brexit, one of the biggest hurdles to agreeing a deal.

Many currency market analysts remain confident that the two sides will reach agreement, as both Brussels and London have much to lose if Britain crashes out the bloc without an arrangement for trade on March 29th, 2019.

“Just not entirely convinced that the actual odds of a no-deal have changed much in the past few weeks [despite the big moves]. The pound remains a sentiment-driven currency,” Viraj Patel, an analyst at ING and sterling bull, wrote on Twitter.

Many investors, however, have rushed to hedge against more weakness in the currency should the negotiations with the EU break down, keeping the currency under pressure.

1 Pilita Clark: When a rude boss keeps you waiting, why not walk out?
2 US threatens retaliation against EU over proposed carbon tax
3 Are there annual limits on inheritances or gifts to a child?
4 Abtran challenges award of €63m contract by Irish Water to rival company
5 Money matters: ‘My father embarrassed us with his haggling’
6 High costs and low returns will fuel nursing home shortage - CBRE
7 Little strategic thinking in election manifestos of Fine Gael and Fianna Fáil
8 Ryanair to pay portion of Peter Bellew’s legal costs, court rules
9 Why Irish savers should forget about banks
10 Comcast acquires Irish cloud-based telco Blueface
Real news has value SUBSCRIBE