Market report: Mood of investors buoyed by signs the China-US trade war may be approaching its endgame 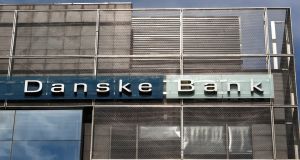 Danske Bank fell 3.4 per cent following the resignation of its chief executive and an update on a money laundering probe that prompted the bank to cut its full-year outlook.

A rally in European shares extended for a second day after gains in trade-sensitive mining and autos stocks, as the mood of investors was buoyed by signs that the China-US trade war may be approaching its endgame.

The Stoxx 600 and leading euro-zone stocks both rose 0.3 per cent to two-week highs with sentiment lifted by hopes that the US and China will return to the negotiating table after the latest round of reciprocal tariffs.

The Iseq index closed up 0.24 per cent, lifted by climbs for Ryanair and CRH. The airline added just over 1 per cent to close at €13.79 the session before it is due to hold its annual general meeting. The building materials group rose 1 per cent to €27.95.

Glenveagh Properties dropped 2.1 per cent to €1.02, as Green Reit, Hibernia Reit and Ires Reit all lost ground, while Bank of Ireland declined 0.9 per cent to €7.45.

However, Dalata Hotel Group was up 2.5 per cent at €6.96 following strong growth in revenue per available room in the Dublin market, while Origin Enterprises and Kingspan were also among the climbers.

The FTSE 100 ended up 0.4 per cent after posting a recovery in the afternoon. An unexpected jump in UK inflation boosted sterling in the morning, which sent the FTSE 100 into the red as many of its stocks earn the majority of their earnings in other currencies. Later Brexit concerns drove sterling down, however, and the FTSE 100 finished up.

Mining companies helped support the FTSE 100 as copper prices climbed on the less harsh than expected US-China trade tariffs. Anglo American, Antofagasta, Fresnillo, and Glencore were the top gainers, up 3.5 to 5.9 per cent.

The biggest FTSE 100 faller was Kingfisher, down 6.3 per cent after the home improvement retailer reported a 15 per cent fall in half-year profits due to poor performance in France, where it owns the Castorama and Brico Depot brands.

Danske Bank fell 3.4 per cent following the resignation of its chief executive and an update on a money laundering probe that prompted the bank to cut its full-year outlook. The Danish bank had traded down 7 per cent earlier in the session, compounding recent woes.

Progress in the planned merger between Linde and Praxair drove shares in the German industrial gases group up 7.8 per cent. A source said Linde was set to sell additional assets to a consortium of Messer Group and CVC Capital Partners for about $200 million (€171 million), moving closer to US antitrust approval for the deal.

Swiss group Adecco fell 6.2 per cent after the world’s largest staffing firm said it had seen a slowdown in growth so far in the third quarter. Its fall also weighed Dutch peer Randstad down 5.1 per cent.

The S&P 500 and the Dow Jones Industrials Average rose in early trading on Wall Street, helped by upbeat housing data and a gain for bank stocks driven by rising Treasury yields, while a drop in Microsoft pressured the tech-heavy Nasdaq.

The benchmark 10-year US Treasury yield moved back above the symbolic 3 per cent mark on Tuesday and hit its highest in four months, while two-year rates reached 2.8 per cent, the highest in over a decade.

Microsoft on Tuesday raised its quarterly dividend by about 10 per cent, but Morgan Stanley said the rise was below the company’s 12-month trailing operating income growth. – Additional reporting: Bloomberg / Reuters