European shares retreat from 11-month highs as US stocks rise

Monte dei Paschi and Danone fall, and Bank of Ireland and PTSB follow Euro stocks down 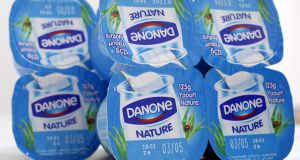 US stocks opened higher, pushing up a gauge of global market indexes on Monday, as investors continued to be bullish on equities ahead of a speech from Federal Reserve chairwoman Janet Yellen, with oil prices and the dollar both little moved.

Bank of Ireland followed other European banking stocks down, losing 3 per cent to end the day at 23.6 cents. Permanent TSB ended 4.87 per cent lower at €2.60.

Insurer FBD closed at €6.76, down 2 per cent, having recovered losses somewhat last week.

The European food sector performed strongly on Monday with the likes of Tate & Lyle gaining. Kerry was up over 3 per cent to €67.75 and Glanbia shares jumped 2 per cent to €15.67.

The index was led higher by a rise among more defensive stocks, including pharma firms Hikma and Mediclinic, as well as Reckitt Benckiser and Unilever as investors took profits in banking stock.

Ashtead Group dropped 4.8 per cent, the top FTSE 100 faller, after UBS downgraded the equipment rental firm to a “sell”. UBS analysts said that pricing pressure was rising for Ashtead, and that they saw a limited benefit from any increase in US infrastructure spending.

Drax Group, Britain’s largest coal power producer, jumped more than 8 per cent after an upgrade from SocGen to “buy” and the European Commission approved its conversion of a third power plant unit to biomass from coal.

Italy’s Monte dei Paschi fell more than 11 per cent as it made a last-ditch attempt to raise €5 billion by year-end and avoid a state bailout.

Elsewhere in the banking sector, Deutsche Bank fell 4.5 per cent and UniCredit was down 4.5 per cent.

Danone lost around 1.4 per cent. The French food group said it expected its 2016 sales growth to be slightly below its original targets due to a weaker-than-expected performance at its European dairy business.

United Technologies rose 2.1 per cent, helping lift the Dow, after Credit Suisse upgraded the stock to “outperform” and increased its price target. Walt Disney was up 1.6 per cent at $105.60 after Bank of America Merrill Lynch added the stock to its US 1 list and said the company’s shares were well positioned to outperform.