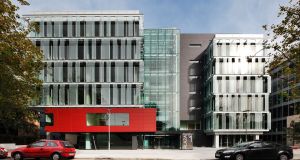 The Burlington Plaza Office office block in Dublin 4, where tenants include Sky and Bank of Ireland

The National Asset Management Agency has selected Californian investment firm Colony Capital as preferred bidder for a portfolio of loans with a par value of €1.5 billion, known as Project Tolka.

Nama pulled the sale of the portfolio, comprising loans linked to property developers and investors Paddy Kelly, John Flynn and the McCormack family, who own property investment group Alanis, last year as Mr Flynn was in talks at the time to refinance his loans with the agency.

However, the agency hired Eastdil Secured in May to relaunch the sale.

The prize property secured by loans in the portfolio is the Burlington Plaza, an office block in Dublin 4 where tenants include Bank of Ireland, Sky and Amazon, which has been estimated to be worth as much as €250 million.

Other assets include Belfield Office Park in Clonskeagh, where Paddy Power Betfair’s headquarters is based, and the former Harcourt Street hospital. The portfolio also includes loans secured on part of the Clarion hotel in Liffey Valley in west Dublin.

Nama removed the Carton House hotel in Co Kildare from the original portfolio. The hotel, developed by Mr Kelly, will be sold separately.

Sources confirmed on Friday morning that Colony has emerged as the lead bidder. It was reported that the firm had seen off offers from New York’s Madison International Realty and Dallas-based Lone Star.

The development comes as property agent Savills has predicted that headline office rents in Dublin could rise to a new record of €67 per square foot in 2018, compared to about €60 currently.

“If consensus economic forecasts prove correct the demand for business space should remain strong,” according to John McCartney, director of research at Savills. “Equally, while there is a considerable amount of new office space under construction, this is unlikely to flood the market.”

Much of the office space under construction will not be finished until 2018 at the earliest, he said.

Mr Flynn co-invested with Mr Kelly and Paddy McCormack on several commercial property deals during the boom and many of their borrowings are interlinked.

US-based Mr Flynn unsuccessfully sued Nama and former management at Anglo Irish Bank two years ago in the US under anti-Mafia laws.

A New York judge said in July 2014 that a case taken by Mr Flynn and members of his family, alleging the now-defunct Anglo Irish had overcharged them for more than a decade, should be dismissed on grounds it related to Ireland more than the US.