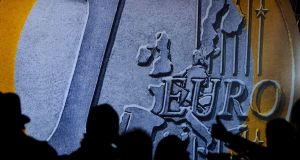 The euro, yen and pound all recovered some ground against the dollar on Friday after slides of 3 per cent or more in reaction to the Federal Reserve’s steer on US interest rates next year.

Before the Fed meeting on Wednesday, markets had seen little chance of another surge in the dollar before the end of the year.

But instead, the upping of predictions for the number of interest rate rises next year brought parity with the euro back into play and took losses for the yen since its peak on US election night in November to just over 17 per cent.

“It’s Friday and we have had a busy week. I would be surprised to see the euro pushed below $1.04 today,” said Niels Christensen, a strategist with Nordea in Copenhagen.

“I still think the risk is to the downside. But from here we move into year-end. The market will be less liquid.”

Many banks’ forecasts for the major developed currencies have been blown out of the water by the moves of the past 36 hours. Only 10 of more than 50 polled by Reuters earlier this month forecast the dollar reaching parity with the euro within the next 12 months. On Thursday that threshold was just over 3 per cent away.

But given the scale of the moves in the past month, driven on by volatility around last week’s European Central Bank meeting and the Italian constitutional referendum, many players may now be content to walk away until January.

One risk to that scenario is a squeeze on dollar liquidity around the year-end. The one-year cost of dollar funding for European banks - called cross-currency basis swaps - is back within sight of four-year highs hit at the end of November.

“I’m going to be watching the year-end very closely,” said the head of trading at one large international bank in London. “If it gets much worse, it may create more of the sort of pressure we saw on the dollar earlier this year.”

Nordea’s Christensen also pointed to the risk, highlighted by October’s 10-per cent “flash crash” in sterling, that a large order could move prices sharply as trading volumes fall over the Christmas holiday.

The dollar was up around another 0.2 per cent against both its New Zealand and Australian equivalents and the Chinese yuan.

With a weaker renminbi one of the big calls of many international banks for the next year, all eyes are on how much more weakness Beijing will tolerate, a year after a speculative run on the offshore version of the currency.