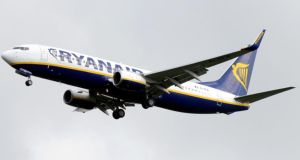 European stocks climbed to an 11-month high on merger and acquisition speculation on Friday, while the dollar’s rally paused as investors adjusted their portfolios to cope with any faster-than-expected increases in US interest rate.

The Iseq rose marginally to 6,495, tracking European bourses. After a 6 per cent jump on Thursday, Bank of Ireland kept its gains but traded flat on the day at 24 cents.

Building materials group CRH, which has been gaining on the back of speculation about a major state infrastructural spend in the US, fell 1 per cent to €32.14.

Swiss-Irish food group Aryzta was up 1.4 per cent at €42.895; the stock has traded stronger in recent times on the back of corporate governance changes and the appointment of a new chairman earlier its week.

Britain’s top share index edged higher on Friday, building on a seven-week high hit the previous day and buoyed by a rally among oil stocks, though IT firm Micro Focus dropped after a rating downgrade. The blue-chip FTSE 100 closed 0.2 per cent higher at 7,011.64 points after climbing on Thursday to 7,010.48 points, its highest level since late October.

Energy stocks added the biggest number of points to the index, with shares in BP rising 2.1 per cent and Royal Dutch Shell gaining 0.9 per cent. The FTSE 350 oil and gas index hit its highest level since September 2014 after the price of oil rose as producers showed signs of complying with a global deal to reduce output.

Micro Focus International, the British firm buying Hewlett Packard Enterprise Company’s software business, was the biggest faller, down 3.5 per cent after UBS cut its rating on the stock to “neutral” from “buy” and lowered its target price to 2350 pence from 2420 pence.

European stocks climbed for a second day to close at the highest level in almost a year, as global investors increasingly favoured equities over bonds after the Federal Reserve increased interest rates. The Stoxx Europe 600 Index rose 0.3 percent, led by gains in oil companies, which advanced with crude prices. Banks and media companies were the biggest losers. Actelion was the best performer in the Stoxx 600, rising 10 per cent to an all-time high, after people with knowledge of the matter said Sanofi is in advanced talks to acquire the Swiss drugmaker in a deal that could be announced as soon as next week.

US stocks opened higher on Friday, with the three major indexes on track to post weekly gains and the Dow within spitting distance of 20,000, a level it has never breached.

The Dow came within 50 points of hitting the historic mark on Thursday and is on track for its sixth weekly gains, a day after the Federal Reserve raised interest rates for the second time in nearly a decade.