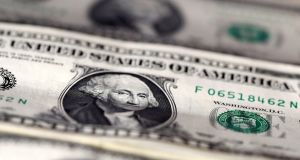 The dollar has been on a tear since the election of Donald Trump. Photograph: Dado Ruvic/Reuters

The US dollar edged higher against a basket of major currencies on Friday, holding near 14-year highs touched after Wednesday’s Federal Reserve meeting, with profit-taking halting the momentum of the greenback’s rally.

The dollar index, which measures the greenback against a basket of six major rivals, was last at 103.140, not far from Thursday’s 14-year high of 103.560 but up only 0.12 per cent on the day in the wake of Wednesday’s Fed decision.

The index gained 1.2 per cent on Thursday to mark its biggest daily percentage gain in nearly six months a day after the US central bank raised interest rates for the first time in a year.

The Fed also signalled it was likely to increase rates three more times in 2017, up from the two increases forecast at the central bank’s September meeting. The projections, combined with expectations that US president-elect Donald Trump’s incoming administration may boost US economic growth with fiscal stimulus, sent the dollar shooting higher and brought parity with the euro back in play.

Profit-taking ahead of the weekend and expectations of a squeeze on dollar liquidity heading into year-end dampened the dollar’s gains on Friday, analysts said.

Only 10 of more than 50 polled by Reuters earlier this month forecast the dollar reaching parity with the euro within the next 12 months. On Friday that threshold was only about 4 per cent away.

But given the scale of the moves in the past month, driven on by volatility around last week’s European Central Bank meeting and the Italian constitutional referendum, many players may now be content to walk away until January.

“We’re probably starting to thin out for the holidays as well, so there are some people taking some profits,” said Win Thin, global head of emerging market currency strategy at Brown Brothers Harriman in New York.