European shares drop to their lowest level since March 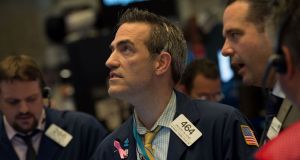 European shares dropped to their lowest level since late March on Thursday as cyclicals fell and some big stocks went ex-dividend, overshadowing a number of upbeat earnings reports.

The pan-European STOXX 600 index ended down 1 per cent at 376.05, after touching 375.42, its lowest level since March 28th as basic resources and banks fell. Euro zone blue chips slipped 1.1 per cent.

The Iseq outperformed its European peers, falling only slightly to 6,618. The biggest eye-catcher was food group Kerry, which ended the day up 3.6 per cent at €77 following the release of half-year numbers which showed revenue had increased 4.8 per cent to €3.2 billion despite an unfavourable currency swing.

Rival food group Glanbia also released a positive set of numbers, sending its share price up 1.2 per cent to €17.59.

Property firms Green and Iris Reit fell on the back of a report from the Royal Institution of Chartered Surveyors in the UK suggesting property prices stagnated in July as a slump in London values spread to neighbouring areas.

In contrast, Hibernia Reit rose 1 per cent to €1.44, a move which traders put down to the presence of one large buyer.

Results came back into focus on Thursday, but some positive updates were outweighed by the impact of several large companies’ shares losing their dividend entitlement.

Housebuilders Persimmon and Taylor Wimpey were among the worst performers, both down 2 per cent, and Barratt Development also fell after data showed house prices grew at their weakest pace in over four years last month.

“Given Brexit uncertainties, the housing market is clearly a key risk for the UK economy,” said Davy Research analysts.

Telecoms company SFR jumped 9.2 per cent after Altice raised its stake in the firm to more than 95 per cent and said it was planning a full buyout offer for the remaining shares.

Second-quarter results, however, put pressure on shares in staffing firm Adecco, chemicals company Lanxess and consumer group Henkel, which were among the biggest fallers.

Around 80 per cent of MSCI Europe firms have reported second-quarter earnings so far, of which more than 60 per cent have either met or beaten analysts’ expectations, according to Thomson Reuters data. Financials and the energy and materials sectors have seen the most beats, while industrials have had the most misses.

“Broadly in Europe, I had thought that [earnings] wouldn’t be as good, partly because the strength of the euro would make [firms’] export markets less attractive and earnings would be more impinged by that, but it doesn’t so far seem to be the case,” said James Butterfill, head of research and investment strategy at ETF Securities.

US stocks fell sharply on Thursday, with the Dow slipping more than 100 points as lacklustre results from retailers Macy’s and Kohl’s added to investor nervousness over escalating tensions between the US and North Korea.

“When you have a market like we have had this year, and it has been amazingly calm, and you introduce a major source of uncertainty, there is bound to be some reaction,” said Brad McMillan, chief investment officer for Commonwealth Financial.

Retailers’ results are being keenly watched by investors to gauge the companies’ strategy to counter number one online retailer Amazon. com’s growth.

Shares of Macy’s tumbled 8.3 per cent and Kohl’s 7.3 per cent after the department store operators reported a drop in quarterly same-store sales that stoked concerns that their turnaround may still be a long way off. Dillard’s slumped 13 per cent. – Additional reporting by Reuters/Bloomberg