European shares down while US tech stocks stage tentative recovery 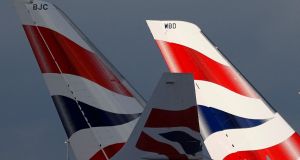 European stocks closed lower on Friday, ending three weeks of gains as investors booked profits in technology and commodity-linked shares due to concerns over rising inflation and interest rates on the back of a jump in bond yields.

After a brief period in the black during mid-morning trading, the Iseq finished down 1.35 per cent.

House builder Glenveagh Properties ended the session up by 0.85 per cent to 83 cents per share, as it announced full-year results and gave an update on its outlook. It reported an 81 per cent drop in profits to €9.5 million last year from €51.5 million in 2019, which was mostly down to the impact of the pandemic. It reiterated guidance, however, and said demand for new housing remained strong.

Insurer FBD fell 0.3 per cent to €7.38, as it announced a full-year pretax profit of €4.8 million, well ahead of Goodbody forecasts of a €14 million loss. The company is still awaiting a court hearing to fix the compensation it must pay publicans after it was ordered to pay out for business interruption insurance.

The export-heavy Ftse 100 marked its weakest session since late-October, snapping three straight weeks of gains as a broader sell-off in bonds spread to global equities.

The Ftse 100 slipped 2.5 per cent, tracking losses in Europe and Asia

Mining stocks including Rio Tinto, Anglo American and BHP were the biggest drags on the index, while oil heavyweights BP and Royal Dutch Shell fell, tracking a fall in oil and metal prices.

British Airways and Aer Lingus-owner IAG gained 3.2 per cent even after it recorded a €7.43 billion loss last year and warned it could not say when normal flying conditions would return.

Rightmove proved the worst performer in a bad day for the Ftse, with shares dropping 6.8 per cent after it revealed a 29 per cent drop in 2020.

Sainsbury’s said it would increase staff salaries at its supermarkets with Argos, which it owns, following suit, with London wages higher. Shares fell 1.4 per cent.

Pets at Home shares rose 3 per cent as it upgraded profit guidance for the fourth time since September.

The benchmark European stock index fell 1.6 per cent, and shed 2.4 per cent for the week – its first weekly loss this month – with technology stocks losing the most as they continued to retreat from 20-year highs.

Germany’s Deutsche Telekom gained 0.3 per cent after it reported forecast-beating fourth-quarter results as its merged US unit T-Mobile continued to drive growth.

Belgian telecom operator Proximus was the worst performer on the Stoxx 600 for the day, after it flagged a lower core profit in 2021.

Heading into the afternoon, the tech-heavy Nasdaq had clawed back some losses on Friday, rebounding from its worst day in four months even as sentiment remained fragile, with fears of a rise in inflation keeping US bond yields near a one-year high.

Shares of Apple, Amazon, Microsoft and Alphabet edged up 1.1-2.6 per cent, but were headed for their worst week in months.

Financials and energy shares, the best-performing S&P sectors this month, slipped about 0.2 per cent and 1 per cent. Technology stocks rose 0.6 per cent and semiconductor stocks advanced about 1 per cent.