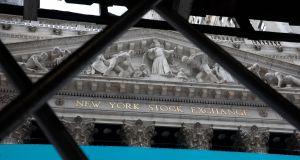 In New York, the Nasdaq fell in early trading, led by a slide in shares of technology-related companies. Photograph: Michael Nagle/Bloomberg

European shares retreated from near one-year highs on Wednesday as concerns over a possible spike in inflation and rising bond yields prompted investors to pull back from risk-driven assets.

The Iseq shed 0.5 per cent as key stocks declined in line with the negative mood across Europe. Packaging company Smurfit Kappa fell 3.2 per cent to €41.52 amid the nervous sentiment, while building materials group CRH – the largest stock on the Dublin market – ended 1.8 per cent lower at €36.45.

Ryanair was another faller, losing almost 2 per cent to close at €15.86. The airline lost its challenge to state aid for Air France and SAS, after a European court decided that the support did not break the rules.

The big company news of the day came from fresh produce distributor Total Produce, which saw its Dublin shares jump more than 32 per cent to €1.94 after it announced a merger with Dole Food Company.

The deal, which will create the world’s largest fresh fruit and vegetable supply business, will see Total Produce delist from both Euronext Dublin and London Stock Exchange, with the combined Dole plc listing in the US.

British shares ended lower on Wednesday as a third national lockdown affected demand for new goods leading inflation to pick up a little more than expected in January.

Investment platform Hargreaves Lansdown dropped 6.9 per cent to the bottom of the blue-chip index after its largest shareholder sold $416 million worth of shares.

Mining company Rio Tinto fell 0.4 per cent after reporting its best annual earnings since 2011 and declaring a record dividend payout.

Signature Aviation slid 0.2 per cent after agreeing to sell its engine repairs business to US company StandardAero for $230 million.

The pan-European Stoxx 600 index closed 0.7 per cent lower. In Frankfurt, the German Dax fell 1.1 per cent, while in Paris the Cac 40 declined 0.4 per cent. Italian and Spanish stocks also fell.

French conglomerate Kering bottomed out the Stoxx 600 as it said sales from its Gucci brand fell 10.3 per cent in the fourth quarter. The broader European retail index lost 3.1 per cent and lagged its peers for the day.

Nivea maker Beiersdorf tumbled 5.9 per cent after it said it did not expect a recovery in profitability in 2021 even though sales should rise.

The Nasdaq fell in early trading, led by a slide in shares of technology-related companies as investors rotated out of growth stocks and awaited the release of minutes from the US Federal Reserve’s January meeting.

Sports performance group has an Irish heartbeat but a global pulse 14:00
EU likely to approve J&J vaccine in early March 13:53
Household deposits reach yet another historic high 12:51
Cliff Taylor: Some have done a lot better than others during Covid 12:44
Birkenstock sold to LVMH-backed group in €4bn deal 11:56